After last night‘s shenanigans, where I spent most of the evening running around various venues like a headless chicken, I came to realize the folly of my approach and decided to take Saturday night “easy.” It’s silly to expect to see everything, so I resolved myself just go to the artists that I really wanted to see, and just let the rest fall into place.
I was not alone in taking this approach. After last nights flustered bouts of hard partying, the whole atmosphere in Harpa this evening felt a lot more chilled and relaxed, and was so much better for it.
Tonight I was especially excited to see Alva Noto and Ryuichi Sakamoto. From my position at the back of Norðurljós hall, I witnessed them making soothing beautiful sounds that were intelligent and required you to think, yet weren’t impenetrable. The melding of the electronic and acoustic worlds can be difficult to achieve, but they managed to do it effortlessly. Alva Noto used the electronic sounds of modern life—mains hum, machine drones, ambient white noise and tones, while Ryuichi Sakamoto added plaintive chord shapes and lines. As they played, these two disparate styles came together into a snug symbiosis
But really impressive were the accompanying visuals that operated as a form of notation to the music. As their set progressed, the visual show changed and evolved from a display of simple one-dimensional staff notation to a set up that displayed speed, rhythm, and textures using multiple notations, dimensions and colours.

After this set, my next hour was spent ambling around and chatting with people and meeting fellow writers and musicians. I bumped into and wound up talking with Ghostigital acolyte Curver about their set last night and how loud it was. “I’ve often wanted to get our sets louder and louder,” he said. “And, last night we managed to get it our loudest ever. But yeah, it was hard. I suppose it’s a case of be careful what you wish for I guess!”
Despite the wide array of styles and genres available to us over these two days, I admit that I was definitely drawn more to the harder, heavier sounds as per my tastes. So to fulfil these needs, off I go downstairs to the car park to catch the set from Kalli & Ewok. And damn, their set was lesson in exemplary mixing. Being at the forefront of most electronic music trends, they don’t settle for a single pathway or sound, opting instead to flit back and forth between genres and times as their mix took in techno, drum and bass, juke, and dubstep. In trying to blend music with such diverse speeds and energy levels, it can be notoriously hard to establish a solid groove, with DJs like Ben UFO being one of the few out there who can pull it off. But Kalli & Ewok managed for the best part to hold all together. There was the occasional bum choice (That Dizzee Rascal track didn’t do it for me at all), but when they played Karenn’s “Sailing Solvents,” it damn near took my head off! Of course everyone was watching James Blake or Ásgeir Trausti, which was evident by the fact that there were only about a dozen people down in the car park, but that just allowed me to do my jungle shuffle moves and pull gun trigger signs of appreciation in peace, and I haven’t done that since 1995.
I stayed on to catch some of the set from Dasha Rush. I was impressed with the skills she displayed. Her musical selections were straight up techno with a dark, moody, cavernous aspect to it. Naturally very Berlin in its feel, but still fitting for the rather gritty location. And judging by the way the place was beginning to fill up, I wasn’t alone in thinking this.
After a while I got restless, so I decided to venture upstairs and explore what sounds and snippets are on offer. I wander into the last part of Hermigervill’s set. The first thing I noticed was that the sound in the Bay Area is very different from last night, much louder and more powerful. I then noted that they’d added a couple of extra booster speakers away from the stage. This was good thinking on the part of the sound engineers, and it was heartening to see that they realised there were issues with the night before.
As for Hermigervill, the complete lack of cynicism in his music and persona is dangerously infectious. Armed with only some battered synths and a Theremin, he was a blaze of flying ginger hair and brazen foot stomping as he moshed his way through his electro pop set. And when he did his cover of Grýlurnar’s “Sísí,” the crowd went fucking nuts, which he managed to top off by doing the solo lines on his Theremin.
Also definitely worth noting was the music that came from Captain Fufanu. Even though they’re still rather young and fresh faced, their music has definitely come on leaps and bounds over the last couple of years. Like many others, they were going for a minimal electro/techno sound, but their tracks were expertly crafted with creeping beats and rather sinister synth pads and tones. So again I found myself dancing like a bit of a loon, cheering them on and having it large.
But I was keeping my powder dry for the final act of the night, the mighty LFO.  Anyone who is seriously into music will often have several a musical epiphanies in their lives, be it a song that affects your emotions, a memory trigger that’s takes you back to a certain period in your past, or a tune that can change your whole outlook on life. My first real epiphany was hearing LFO’s “LFO” when I was 15, all the way back in 1991. The power and simplicity of that two-note bassline and scary synth pad meant that when it came to electronic music, I never looked back.

So the idea of missing LFO perform in Reykjavík was never an option. Making sure I got there early, I was treated some brilliant banging machine drilled techno that was paired with a light show that was so luminescent that it damn near burned my retinas off! Mark Bell managed to segue classic tracks from the canon such as “Freak,” with fresher sounds and styles, doing so seamlessly. The whole set was a non-stop relentless assault on the senses from a man who, even after being in the game for over twenty years, is still obviously in love with the techno form and the way a crowd reacts to a pulsing sound system. When he played “LFO,” the whole crowd erupted, as did I. It was definitely a special moment for me, as I found myself with my fists in the air pumping along to the kickdrum. At the end of it all, I found myself drained but elated. This is how techno should make you feel.

At the end of it all, yes there were teething problems with the sound, the line up was a little disjointed and it took a while for people to get into the spirit of it all. But it’s definitely worth saying that this inaugural Sónar Reykjavik event was pretty good—deserved praise should be given to both Björn Steinbekk and DJ Margeir for having the nerve (and the balls) to pull it off.
— 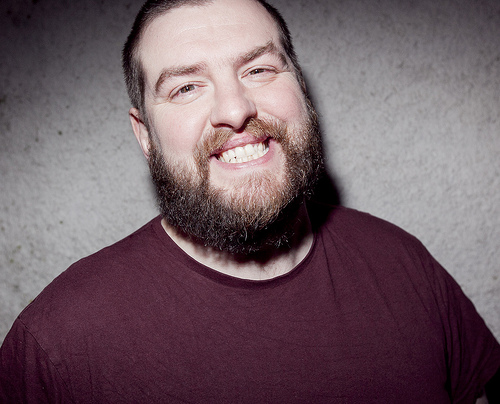 Hailing from the north of Scotland, via Liverpool and London, long-term expat Bob Cluness has been writing for The Reykjavík Grapevine since 2009, concentrating on cultural issues and music in Iceland. In his spare time he also works for international prosthetic company Össur, as well as running the blog and club night Reykjavík Sex Farm. A confirmed badass, Bob still likes to help kittens stuck in trees and old ladies across the road.