Let’s be honest—some of the best fun at this festival has nothing to do with bands, booze, partying or passing out in a gutter. It’s about watching OTHER PEOPLE do all those things. And like everyone else in the Twittersphere, sometimes we latch onto a rumour or two. Here are a few highlights from our Airwaves 2k12 of things seen and overheard.
I saw a female festivalgoer projectile vomit outside Harpa, the bile caught a gnarly ride on a gust of wind and went right back onto her. I shit you not. She vomited right on herself as she was toppling over from the sea-swept winds. I couldn’t look away. It was remarkable, repugnant and enthralling. New York Times would have given it ‘Spew-tacular show of intestinal beauty!’
— Chris D’Alessandro
Minutes after I was denied entrance to Iðnó on the grounds that it was full, Björk arrived with a posse of friends and was subsequently also denied entrance. She didn’t think the bouncer has seen her purple VIP wristband properly, so she proceeded to wave it in his face until she was positive he’d seen it. Still he didn’t budge. In fact he closed the door in her face. Only after someone else came by, tapped him on the shoulder and whispered something to him did he let her in. Employee of the month.
— Thomas L. Moir

Middle-aged Icelandic lady: I mean, I like Jónsi solo.
Other middle-aged Icelandic lady: I totally agree, I just don’t like Sigur Rós.
— Þórir Bogason
On Thursday night I was hanging at Amsterdam when I ran into an acquaintance who comes over for Airwaves regularly. She leaned across the dance floor and shouted that she had just spotted Robin Williams (star of Flubber and Jumanji) in the crowd at Iðnó. I began to text people furiously to confirm the rumour but instead received this text message in return from a fellow Grapevine team-member:
“I just saw Björk at the Art Museum. She tried to get in backstage and they WOULDN’T LET HER. Maybe Robin Williams was with her? That would be CRAZY. The headline of my review may very well be ‘Björk: Godmother of Icelandic music, deemed not cool enough for Airwaves’. I SAW IT WITH MY OWN EYES.”
And a little later on: “BREAKING NEWS: Björk is in.”
— Rebecca Louder 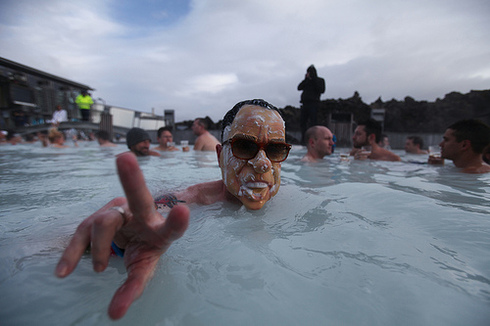 I had a typical pan-European nonsense moment in the smoking cage in front of Faktorý. I was there casually smoking my cigarette with a friend and wondering who I could take if a cage fight broke out in this thing (conclusion: no one).So, out of nowhere this German cat swims up to me smiling and staring at me and asks, “When will you start smoking?”
I’m not sure how to take it, “Eh…excuse me?” I say.
“When will you start smoking?” he repeats. I kind of stare at him in disbelief before it dawns on me that he must want to know when I took up the habit.
“Well, I’ve been smoking on off for a while I guesshow about you?”
“Oh, I don’t smoke…” he says, stopping midway for a puff.
“Alright then.”
“…but I want to start smoking…because…sorry, my English is not so good…die flachenziegoobfhenallchen? Dreutzmachzuch?…You know, for meeting people”
“Ah… I see. You want to be a social smoker?”
“Man, you look like 28… you should not be smoking this shit will kill you.”
“Yes. It is good for me”
“No, cigarettes are really bad for you”
“No they are not”
“They are bad for you”
“Yes zey are”
I look at my friend to see if he’s listening to this conversation and when I look back the German with the piercing gaze is gone.
— Ragnar Egilsson
So Laugavegur was closed to pedestrians after a roof was blown off a building. People were clinging on to bollards and mothers clutching their children. Office workers were standing at the windows looking out in amusement and/or horror at the stricken tourists. A dad near me had his elasticated beanie hat whipped right off and it flew into the sky like a leaf. It was like the fucking Mayan apocalypse in Reykjavík.”
— John Brainlove
At an after party on Saturday night, I went into the host’s kitchen to find a beer, but instead of beer I found a gentleman on his hands and knees under the table. He was trying to mop up a puddle of blood with a couple of paper towels, but he only succeeded in spreading it around into a big pink mess. He stood up and looked at me, and he had blood streaming down his face and onto his shirt. I asked him if he was okay, and he nodded. I looked over his shoulder and saw blood splattered on the wall and realised that he was far from okay. I still have no idea what happened, but I hope he’s feeling better.
— Joel Hoard
“I saw the best minds of my generation destroyed by madness, starvin hysterical naked…” DJÓK! Well, I kind of saw that, but that party shouldn’t be spoken of in public. I saw a lot of funny and interesting things at Airwaves 2K12: folks getting blown into the stratosphere, severely intoxicated persons crawling the streets on all fours to avoid being blown into the stratosphere and the usual explosive Airwaves romances blow up into everyone’s faces (you start recognizing a pattern after a while, it’s fascinating). Aside from all those glorious little moments, I guess my favourite sight was likely Airwaves honcho Grímur Atlason at the back of a sparsely attended Faktorý DJ set, showing off a cell-phone photo of him posing with Mudhoney’s Mark Arm, while the festival raged around him. That guy really loves his Mudhoney. Oh and I was also severely amused by Dikta’s Livestrong concert advertisement wristband.
— Haukur S. Magnússon
I played a show with my dress on backwards…. Which is about as exciting as it got during Airwaves. Harpa doesn’t provide much room for spontaneous things.
— Lóa Hjálmtýsdóttir