Hacking Their Way To The Future Of Music

It’s been said that music expresses emotions that words cannot, but what if there was a scale to quantify exactly how “sentimental” a song was? A programme called Senti(Com)ment does just that.
Created by software developer Nikola Chochkov, the programme analyses user-submitted comments from music web service Soundcloud, and then gives the track a “sentiment” score using code taken from Musicmetric, a data and music analysis service. With this piece of code, Nikola has effectively created a way to express the heart-breaking sadness of Nina Simone’s “Don’t Explain,” or the sweeping, atmospheric beauty of Grizzly Bear’s “While You Wait for the Others.” Granted, the emotion in these songs can’t be fully captured in the one to five scale the programme assigns them, but the software is just one example of the limitless, exciting and ever-expanding possibilities that can occur when music meets technology. 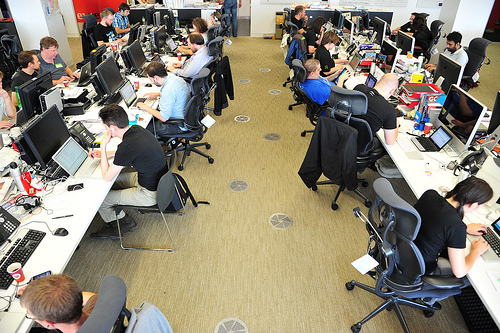 Nikola created his program at a 2011 Music Hack Day in Berlin. This 24-hour “hackathon” event began in London 2009, and allows developers, programmers, artists and music aficionados to come together to build the future of the music industry. On October 27, computer geeks and music nerds in Reykjavík will have their own opportunity to try their hand at creating the next big thing in music.
“The idea is to bring together likeminded people to hack on fun stuff related to music and technology,” says Karl Tryggvason, one of Music Hack Day Reykjavík’s organisers. “The goal is to build something in 24 hours and then present it. Of course it’s only 24 hours, so it might not be a complete or finished version, but at least ideas have been moulded and connections and programmes have been made.”
Refining Hack
Karl says despite the event’s name, there is nothing subversive or illegal about Hack Day. Instead, participants will be given free access to the code and programming that are the nuts and bolts of some of the most popular web-based music services, including Soundcloud and Spotify. This code, called the application programming interface—or API—contains the structured data, analysis software, streaming capabilities and anything and everything else that makes a music web service work. With this information, the possibilities to create are endless.
While participants are encouraged to use existing APIs, it’s not required. “APIs are then introduced to the participants, and people can use those in their hacks, but they don’t have to. If you want to hack on something else, it’s completely open,” he says. “The companies attend because they want to foster a network of developers, but it’s not mandatory to work using only their tools.”
In this way, Hack Days are redefining an industry once closely guarded by massive music labels and promoters. As new technologies have been developed and refined, the pearly gates of the music industry have been opened to everyone, and now anyone with coding skills can go forth and ‘hack’ the music industry as they see fit.
Ultimately, not only does the event redefine an industry, it redefines the very word itself.
“To a lot of outside people, ‘hack’ has a negative connotation. It’s not about hacking or breaking in or breaking anyone’s copyright,” he says. “It’s ‘hacking’ in the sense of making your own stuff. The event is meant to provide new ways of looking at, thinking about, or interacting with music.”
In an age where digital music services are popping up faster than the time it takes to download an mp3, these so-called “hackers” are using technologies that would have been unheard of five years ago to create programmes at lightning speed.
“Some years ago, we weren’t able to work that fast, because we lacked the tools to prototype with this rapid speed,” says Johan Uhle, the coordinator of several Music Hack Days in Berlin and one of the co-coordinators of Music Hack Day Reykjavík, in an email. “But with the advancement of technology as well as its drive towards open ecosystems and APIs, it is very feasible today to conceive an idea and build it within a weekend.”
Something For Everyone
While participants in Hack Day need to have the technical know-how in order to conceptualise and carry out their ideas, even the non-tech savvy have a place at Hack Day. Not all creations at Hack Day are purely digital, and perhaps some of the most interesting creations—including an Amsterdam Hack Day original where participants created an umbrella that used sensors to play a random 8-bit tune when hit by rain— require an entirely different set of skills to execute.
“Everyone should bring something to the table. It’s not all programming. There are designers and artists, engineers and people who make instruments,” Karl says. “So if you have a music and tech related idea that you want to try and sketch out, it can be a good place to look.” 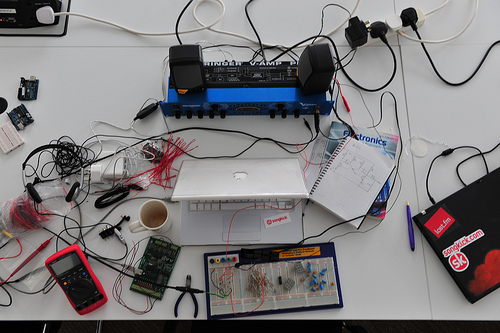 For those who would rather observe, there will be an opportunity to come and see the creations at the end of the 24-hour period when each participant gets two minutes to explain their “hack,” which Johan says tends to have a very positive reception with even the most technologically inept.
Creations presented at past Hack Days have included Tracks on a Map, which allows users to listen and find Soundcloud tracks from any genre by clicking on a map of the world; Berlin Transit Pulse, which offers a real-time visualisation of public transit in Berlin through an audio piece that changes with traffic flow; and Drinkify, which allows users to input what they’re listening to and get a suggestion of what to drink in return.
It’s Not All About the Hardware
Although it may be focused on technology, Hack Day is not entirely about anti-social developers sitting silently behind their computers, pounding madly away on their keyboards, and writing hundreds of lines of complex code. Karl hopes Hack Day will spawn not only new music programmes, but new friendships and connections as well.
“It brings a social offline or meet space aspect to it. I know a lot of people—myself included—sit at home tinkering with stuff, so it’s a good chance to learn from likeminded people and get your idea out there,” he said. “And then, it should be a fun time, if a bit nerdy!”
For more information about Reykjavík Music Hack Day, check out their website.