Echoes Of The White Ark

Reggae/dub big band Ojba Rasta released their debut album last Tuesday and it’s quite phenomenal. Sporting eight songs, hair-metal guitar solos, rapping, sci-fi synthesizers, Icelandic poems from the 19th century and a whole lot of echo, it’s one of the most adventurous albums to come out of Iceland for a long time. The songwriting is strong, the lyrics stand out and it’s loaded with layers of sounds without ever feeling cluttered.
I plan to meet up with Ojba Rasta frontrunners Arnljótur and Teitur at reggae home base Hemmi & Valdi for an interview. However, when I get there Teitur isn’t diggin’ the vibe. He feels it is too noisy and is quite adamant about relocating the interview to his apartment so he can get into his element. When we arrive, Teitur has really slipped into his zone and also something a bit more comfortable—a red silk robe, checker trousers and a cowboy hat.
“Our next album is gonna be a country record!” he declares, getting up to light some incense and placing a Black Uhuru LP on the record player.
BIRTH, UPBRINGING AND LETTING GO
When the mood had been established I turn on the recorder and ask how they felt about the album being released.
“Like we have given birth to child,” Arnljótur responds.
“I think it’s more like watching your kid leave home when it’s grown up,” Teitur says. “The forming of the band was the birth and the recording session was the upbringing and now our child has been released into the world and has to stand on its own.”
Arnljótur disagrees. “I’m not on the same metaphorical page as you. For me it was like a birth. Period. It was in my system. Now it’s out.”
The band recorded the album in spurts over a period of two years with producer Gnúsi Yones, the singer of reggae band Amaba Dama and former rapper/producer of pioneer Icelandic hip hop group Subterranean. His studio, History, is located in his garage.
“I sometimes like to call it his ‘White Ark’ to contrast Lee ‘Scratch’ Perry’s ‘Black Ark’” Arnljótur says. “Gnúsi has this amazing ability to create huge and expansive sound in this tiny garage,” Teitur adds. They both agree that working with Gnúsi was very rewarding and it often seemed as if he was reading their minds.
“If I said ‘you should delete this…’ he was already in motion doing exactly that before I had even finished the sentence,” Arnljótur tells me. 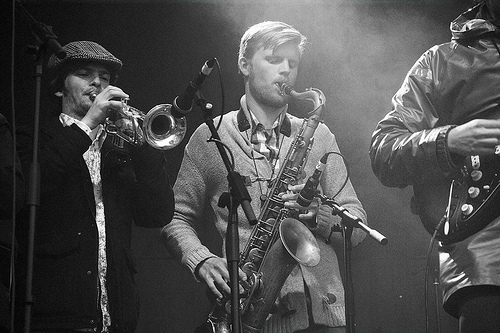 BRINGING THE STUDIO TO LIVE PERFORMANCES
With eleven musicians in the group the process was quite chaotic and time-consuming. Up to 90 tracks were recorded for some songs before Gnúsi and dub master Hjalli, who mixed the album, went at the takes with razor blades. “We wanted it to be a proper studio album. Dub music was created in the studio and there are certain things you can achieve on a recorded album that are not possible in a live setting,” Arnljótur says.
Some bands try to catch a live feeling on their albums, but Ojba Rasta takes the opposite route, bringing a studio feel to their live shows with a special dub master. His instrument is the mixer and his job is to cut out instruments at certain points and manipulate sounds, often piling on loads of echo.
“It’s a lot of work, we always have to show up extra early for the sound check,” Arnljótur says.
“When you book us, you always get the full Ojba Rasta experience,” Teitur adds. He then leaves the room and comes back with two hard-boiled eggs. As he breaks the shells and begins eating them Arnljótur asks “You don’t want salt to go with it?”
“No,” Teitur replies. “I like them pure.” 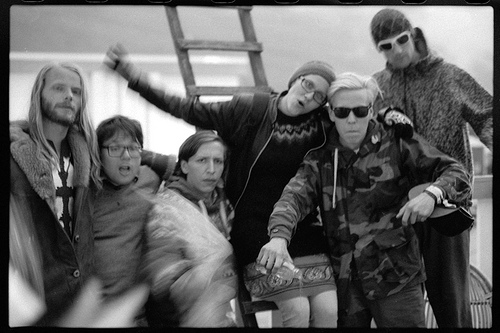 A DUB CONVERSATION
Ojba Rasta was formed a little over three years ago. In the beginning, the band mostly performed cover songs, slowly writing more songs, adding musicians and finally morphing into the eleven-member monstrosity that it is today.
Recently, several of their instrumental pieces have gained vocals. “For some reason I stopped singing when I was nine years old,” Arnljótur tells me. “Then just recently I started secretly singing a backing vocal here and there until I finally found my voice, which had been muted for 15 years, through Ojba Rasta.”
But are they the next Hjálmar? “We’re not the next anything,” they both agree. “Not at all. I don’t look at it as a competition but rather as a conversation,” Arnljótur says. “And we want to encourage Icelanders who are making dub or reggae music to step up and join this conversation.”