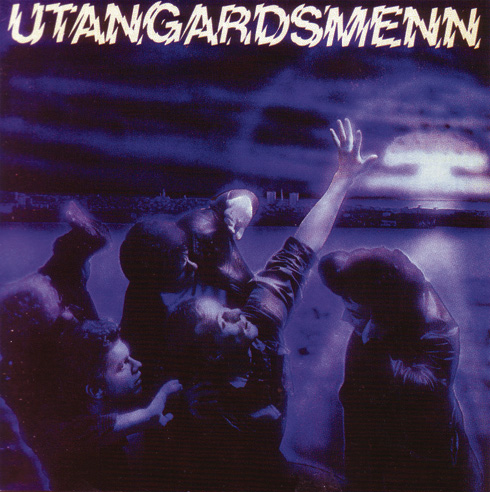 The rhythm section of Utangarðsmenn—Magnús and Rúnar—came from the tiny village of Raufarhöfn. Brothers Mike and Danny Pollock were the guitar players, two dudes with an Icelandic mother and an American father. They and Bubbi had met at the box factory Kassagerðin, where they all worked, and an electric friendship had developed.
Bubbi Morthens had been writing music since 1974, when he was 17 years old. He was a migrant worker, going from village to village, working in fish factories, getting drunk and banging out original radical folk songs under the influence of Bob Dylan and Woody Guthrie. He played his stuff for co-workers on his acoustic guitar, and had sometimes played gigs, including ones for the Icelandic Folk Music Society. When Bubbi started working on his debut solo album in a small 8-track studio, the original idea was to make an acoustic Dylan-inspired album. He paid for the studio out of his own pocket, so the album processed slowly. After meeting the Pollocks, Bubbi traded out Dylan for punk rock, or as he called it, “guano rock”.
Bubbi’s debut album, Ísbjarnarblús (“Polar bear blues,” named after a notorious Reykjavík fish factory, Ísbjörninn) was released on June 17, 1980. By that time, Utangarðsmenn had played a lot all over Iceland and more and more people had started taking notice. In June, Utangarðsmenn supported none other than The Clash in Reykjavík. Of course, this was an awesome show and there was definitely something in the air, some wave of freshness hitting the Icelandic music scene.
Up to that time, all the main players on the Icelandic pop scene had roots in the sixties, like Björgvin Halldórsson, who had been the main pop star in Iceland for most of the seventies, both with his solo albums, his Eagles-inspired band Brimkló and his 50s rock (a la Grease, American Graffiti, et al) inspired trio HLH-flokkurinn. There was stagnation and an urgent need for a younger generation to make a difference. Bubbi went straight for the jugular on Utangarðsmenn’s first four track EP, released Oct 1st, 1980: “I’m a certified invalid / I listen to HLH and Brimkló / I’m a certified idiot / allow myself to be ridiculed / support the market” he sung on “Ha Ha Ha,” a reggae track, subtitled “Shrimp-reggae.” The old guard tried to be cool about the insult, but of course many were deeply offended.
Utangarðsmenn were in a hurry. The band’s only studio LP, Geislavirkir (Radioactive), was released that November, and has since become a classic. On it the band runs through guano rock ditties such as “Hiroshima”, with its catchy chorus: “You will all… You will all… You will all… DIE!!!” (This was during the heights of cold war, you see), but occasionally slows down to chillier reggae tunes. Bubbi was all over the media, commenting on various issues and ridiculing the old stiffs. In 1980 he became the biggest rock star Iceland had seen since, well, since Björgvin Halldórsson eleven years earlier. All the attention he got, his fierceness and coolness, it was impossible not to be fascinated. He was the horse that hauled the rock wagon. All over the place, new bands were being forming and would come out of the woodworks in the following months. The year 1981 was to become the freshest in Icelandic rock history. More of that next time.
Dr. Gunni’s History Of Icelandic Rock Part 16