Punk and new wave came late to Iceland. In 1979, all Icelandic records were still either disco, foamy pop or Meat Loaf-imitations. Some punkerly types were lurking around, though, young kids buying their music by mail order from London, falling flat for The Clash, Sex Pistols and all those exciting new sounds. The Stranglers came to Iceland in 1978, promoting their 3rd album for the English press, which accompanied the band on an arctic bender, playing a sold out show for about 5.000 Icelanders. This gig was an eye-opener for many.

The first Icelandic punk band, Fræbbblarnir (“The Staaamens”), started as a joke at the Kópavogur College in 1978. Two college bands had some months earlier tried to do some punk damage, Þvag (“Urine”) and Halló & Heilasletturnar (“Hello & The Brain Splatters”), but both died after their first gigs. Fræbbblarnir’s first gig was intended as a joke to shock their uptight schoolmates and teachers, but playing was just too much fun, so the joke lingered on. The band performed punk covers with Icelandic lyrics, but soon started to write their own music. For all of 1979 they soldiered on, spreading the punk gospel in disco infected Iceland, often being boo-ed off the stage but still gaining some momentum along the way.
As 1979 wore on, Fræbbblarnir started to rent the Kópavogur cinema for gigs. A handful of like-minded groups had started to sprout up, so the cinema soon became the Mecca for Icelandic punk. The gigs usually took place on Saturday afternoons at two. There was no age limit, so this was where many youngsters, including me, got converted to punk rock. There was not much else happening, y’know, especially if you couldn’t be bothered with sports.
Fræbbblarnir went through some line-up changes in the beginning. Founding members Valgarður (singer) and Stefán (drums) were soon joined by a dangerous looking bass player from Akureyri, Steinþór. He looked the most punk of them all, tall and cool, often sporting Nazi jewellery. These guys were about 21-years old in 1980 when two 14-year-old guitar-players were initiated into the band, Ari and Tryggvi. They had previously hung outside the band’s rehearsal garage, running away trembling with fear wh 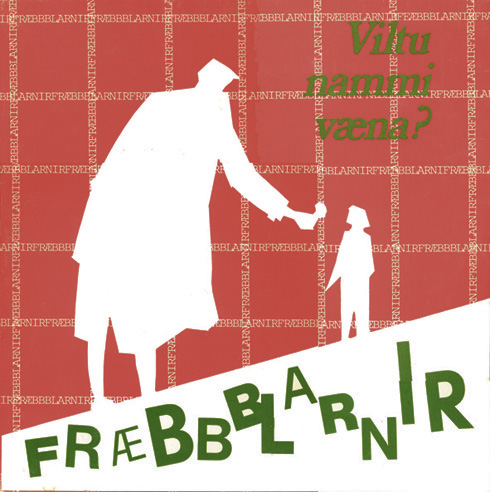 en the band came out to smoke. Ari quickly jumped ship, but the remaining four piece was the classic line-up that started working on a LP in 1980. The album, Viltu nammi væna? (“Do you want some candy, dear?”), came out at the end of 1980 (a previous line-up of Fræbbblarnir had recorded a three song EP in 1979 that came out on an indie label in Sheffield in 1980).
Saturday, April 12th 1980. Another afternoon punk concert at the Kópavogur Cinema. Fræbbblarnir headlining, some band called Utangarðsmenn (“The Outsiders”) is also on the bill, and this is my first gig ever with my first band, Dordinglar (“Spiders”). I’m so stressed out that I suffer attacks of diarrhoea during soundcheck. Those Utangarðsmenn sure are tough looking guys, all jeans and leather jackets, sunglasses and grins. At age fourteen, I’m almost afraid to look at them. The Fræbbblarnir dudes are much more chummy. Bubbi Morthens, the singer from Utangarðsmenn, a muscular tough guy, asks me to pass him an empty coke bottle so he can put his cigarette out. I obey and try not to faint.
This was Utangarðsmenn’s third gig ever, and the one that broke the band. The act was self-confidence incarnated. Bubbi took Iggy Pop as a cue for his stage act and a vintage Fender Telecaster was smashed to bits during the set’s highlight. The audience was in awe. From now on, Fræbbblarnir would support Utangarðsmenn, not the other way around….