I first visited Iceland thirty years ago in my capacity as a travel writer. Why I chose Iceland, of all places, was simple: no one I knew had ever gone there. Likewise, I’d recently been travelling in Scotland’s Outer Hebrides, where I’d been subjected to the Free Kirk, a religion so dour that it makes ordinary Presbyterianism seem dangerously licentious, and I felt like I needed a change.
On my first night, I found myself in the now-defunct Reykjavík watering hole called Oðal. I was standing at the bar next to a man who was so well dressed that I took him to be either the Belgian ambassador or an extremely successful surgeon. After a bit of preliminary chit-chat (What did I think of Iceland, etc.), he ordered a double brennivín for both of us, then said: “I’m a murderer…”
This is a real conversation stopper. What can you say in reply? “Well, I’m an American,” I told him rather shakily.
“It’s true,” the man remarked. “I murdered my wife.”
The calm way in which he said this made killing one’s wife seem like a quite reasonable thing to do. He went on to tell me that he was on leave from prison, adding that no matter what you did in Iceland, whom you killed or beat up, you could leave your prison cell just so long as you reported your whereabouts to the police every four hours.
“Iceland sounds like a very tolerant country,” I said.
“Oh yes. It even tolerates people like me.”
“How did you happen to kill your wife?” I asked.
“Too much brennivín,” he replied. “By the way, would you like another double brennivín?”
No, my treat, I said, and I bought us both bottles of ginger ale. 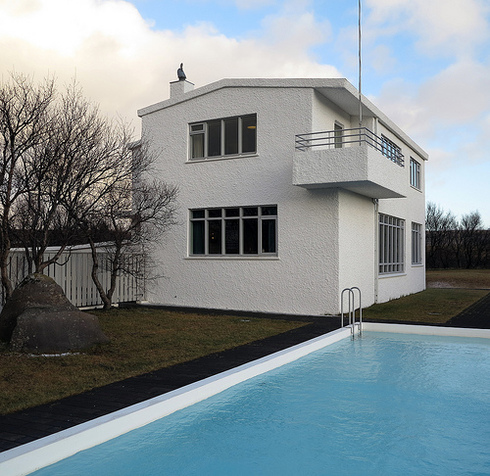 I decided I would have to balance the scales by meeting a non-murdering Icelander, so the next day I called up Halldór Laxness, and he invited me to visit him in Mosfellssveit that very afternoon. Only in Iceland, I thought, can you find a Nobel Prize winner’s telephone number in the phone directory, ring him up, and then be invited for a visit, all in only a minute or two.
I took the ﬁingvellir bus to Mosfellssveit. After I arrived, I saw living evidence that Halldór had not murdered his wife, for that wife, Auður, greeted me at the door. Such things are a comfort to a traveller in a strange land for the first time.
“Halldór is upstairs reading Proust,” Auður told me, and then made me some coffee.
When Halldór finally came down, I asked him if he liked reading Proust. 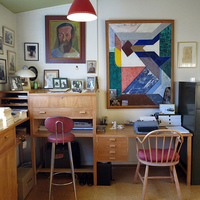 “Nei!” he said. “Certainly not!”
“Then why are you doing it?”
“Because my publisher requires it.”
I was appalled. Here was this giant of world literature, a man who’d written twenty or thirty books, and his publisher wanted him to read Proust, presumably to inject a dose of French civility to his staunchly Icelandic oeuvre.
As it happened, my ears were less than perfectly attuned to Icelandic English: Halldór hadn’t been reading Proust; he’d been reading the proofs for his forthcoming book.
Later I surveyed his library, which had translations of his works in a variety of languages, but there were far more translations in Dutch and Polish than there were in English. Remember: this was the early 1980s, several years before his works began appearing in England or America. In fact, my then editor, when I mentioned Halldór to him, said, “Hall door lacks who? Never heard of him.” 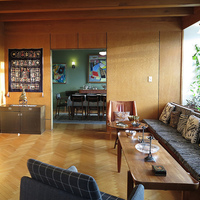 “It’s a pity you’re not better known in America,” I told Halldór.
“I am not Agatha Christie!” he proclaimed. And then, as if to prove this point, he lit one of the large cigars that had become his trademark. After he smoked half of the cigar, he put the other half in a pipe and smoked it, thus proving that a genuinely creative individual can smoke a good cigar right down to its final ash.
Proust didn’t go away. For the remembrance of things past—or maybe I should say persons past—was the theme of my last evening in Iceland, when I attended a séance in Kópavogur sponsored by the Helgi Pjeturrs Society. An eminent Icelandic geologist, Helgi Pjeturrs was an avid believer in the spirit world; he also believed Icelandic was the language of the Afterlife, and that all Afterlifers were obliged to learn it. He died, or at least his physical part died, in 1949.
There were eight of us at the séance, all holding hands and looking expectantly at each other: who would grace us with their presence tonight? Then all the lights went out except for a globe of the world illuminated by a single light bulb. The medium went into a trance, and nothing happened for ten or fifteen minutes. At last the first presence arrived—Helgi Pjeturss himself (he always comes first, I was later told). Helgi welcomed us to the séance as if he was welcoming us to his home.
There were several other presences who had some connection to the people in the room. One of them was an Italian who wanted to reassure his Icelandic friend that he was, as the medium declared, “all right.” Yet how, I wondered, can you be “all right” when you’re dead? 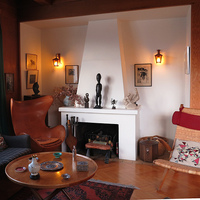 And then the medium was speaking in the low, deep voice of…Abraham Lincoln! Abe told us that he was all right, too. He was living in the Andromeda galaxy and learning Icelandic. He did not bear a grudge against John Wilkes Booth or anyone else. All he hoped for was world peace. Oh yes: Icelandic was a very difficult language…
“Wasn’t that nice?” one of the séance-goers observed to me afterwards. “The medium brought forth a fellow countryman of yours just because you were here.”
Yes, it was nice, I had to agree. Especially since the medium could have hauled out a considerably less desirable dead president than Abraham Lincoln. But it was also a typical example of Icelandic hospitality, wherein the guest is offered an unencumbered window on what might well be the most eccentric place in the world, no, the whole universe, including the Andromeda galaxy.
The photos used of Halldór’s residence are from a book called ‘Writers’ Homes’ by Björn G. Björnsson. It’s part of a series of books published by the Salka publishing house called Iceland’s Cultural Heritage. Other books in that series include ´Large Turf Houses’, ’18th Century Stone Buildings’ and ‘Turf Churches.’