To The Vík-tor Go The Unspoiled Spoils

“There were only six people in my year at school,” says Eiríkur Vilhelm Sigurðarson, who is possibly Vík’s most familiar face. “The other five have moved to Reykjavík. I’m the last one here.”

I knew it was small, but this detail puts the size of Vík into sharp perspective for me.

The manager of the information centre in the heart of town, Eiríkur probably knows Vík better than most, and he brims with a youthful wonderment at the almost supernatural forces in the area.

To the north you have Katla, one of Iceland’s most active volcanoes, currently more than 50 years overdue for an eruption. To the south, there’s the Westman Islands, home to the volcanoes Helgafell and Eldfell, the latter of which erupted in 1973.

From day to day, Eiríkur’s time is consumed by projects designed to savour the cultural history of the town, although the enthusiasm with which he discusses the projects makes them seem deeply personal.

“In 1910, we had three shoemakers here in Vík. At the time the population was only about 100,” he pauses for effect, before continuing, “and yet, three shoemakers! Nobody knows why,” he says with giddy excitement.

Vík experiences perhaps a bigger contrast between high and low season populations than anywhere else in Iceland. Over the winter months, Vík’s 500 full-time residents are about the only people you’ll find there. From late May through October, however, the town sees between 5,000 and 10,000 tourists passing through.

Approaching the incredibly warm and lodge-like Norður Vík Hostel, my traveling partner and I are welcomed by a sheet of paper jammed in the gap between front door and frame. Scrawled on the paper reads the following: “Welcome visitors, please make your way inside and find your rooms upstairs with your names on the door. But PLEASE take your boots off before going upstairs!”

As contradictory as it seemed to trust strangers with your business and livelihood, but not with the cleanliness of the carpet, we felt immediately at home and pushed inside.

Visiting in low season, we were one of only two groups visiting Norður Vík. The only others were a young British accountant, his girlfriend and her father.

A chat over a beer in the comfortable communal lounge room of the hostel that night—complete with a cosy, open wood fire—revealed them to be pretty hardcore travellers. “Last year we went on a tour of North Korea,” the boyfriend said, “so this year we decided to do something where we’d have a little more… freedom.”

Based on my first impressions, they could not have chosen a better place to visit.

Whilst blissfully remote, visiting in low season does have its downsides: primarily the fact that all but two local restaurants are closed, severely cleaving your options for good local cuisine. Thankfully, Norður Vík has kitchen facilities available for use by visitors. Although if you do plan on using them, it is recommended that you check the opening hours of Vík’s only supermarket, as it doesn’t stay open all day.

While activities for visitors are similarly limited outside of peak season, I cannot imagine a time of year when the surroundings are any more picturesque or carry a more mysterious atmosphere. Plumes of fog greeted us at every corner we turned before dissolving before us as we moved towards them.

Such visuals come at a price though. For much of our visit we’re bombarded by sleet, hail and rain. We don’t walk but rather slide along the footpaths, each coated with an inch or so thick layer of ice. These conditions make moving from place to place a slow endeavour and limit our time spent outdoors considerably. The moments we are outside are spent zigzagging from awning to awning towards our destination. Wet weather protection and shoes with decent tread are essential items to bring.

For feather and wool lovers

A large illustrated chart documenting the species of bird native to the area hangs in Eiríkur’s office. He recalls to me the bizarre and tragic story of how the Snowy Owl became extinct in Iceland.

“These hunters went out on a hunting trip one day, and found a group of ten Snowy Owls. And they figured there were plenty more, so they shot them, and it turned out they were the last ones,” he says with more than a hint of disappointment.

Thankfully, puffins, as well as dozens of other unique species of native bird, are still very much alive and breeding. If you’re a bird watcher, admirer or photographer, Vík is a one-stop shop for all your birding delights.

Later that afternoon we stop by Vík Wool, a production plant for the region’s wool trade, and an on-site shop selling their wares. After browsing the merchandise for a few minutes, we ask the lady at the desk whether we can perhaps take a look behind the scenes and she obliges pleasantly.

We push through a curtain and enter a long noisy room with about ten desks parked parallel to one another, each occupied by a lady in a lopapeysa. The women are each operating sewing machines effortlessly and chatting, or rather yelling, amongst themselves over the rapid fire of mechanic needles.

Guðrún Ólafsdóttir, a seasoned wool-maker, gives us a tour of the facility. I ask how experienced one has to be to land a job at Vík Wool. “Anyone can do it,” she says. “If you have an interest, it will take you four to six months to be good.”

To give you an idea of the quality of wool we’re dealing with, the region’s sheep have been known to survive for up to 40 days in avalanches while patiently waiting for their farmers to locate them and airlift them out. I consider buying a garment as a survival tool should I ever be at risk of an avalanche. While you’re getting about as authentic a lopapeysa as you’ll find anywhere in Iceland here, expectantly, hand spun quality wool doesn’t come cheap, at between 7,000 to 20,000 ISK a pop. 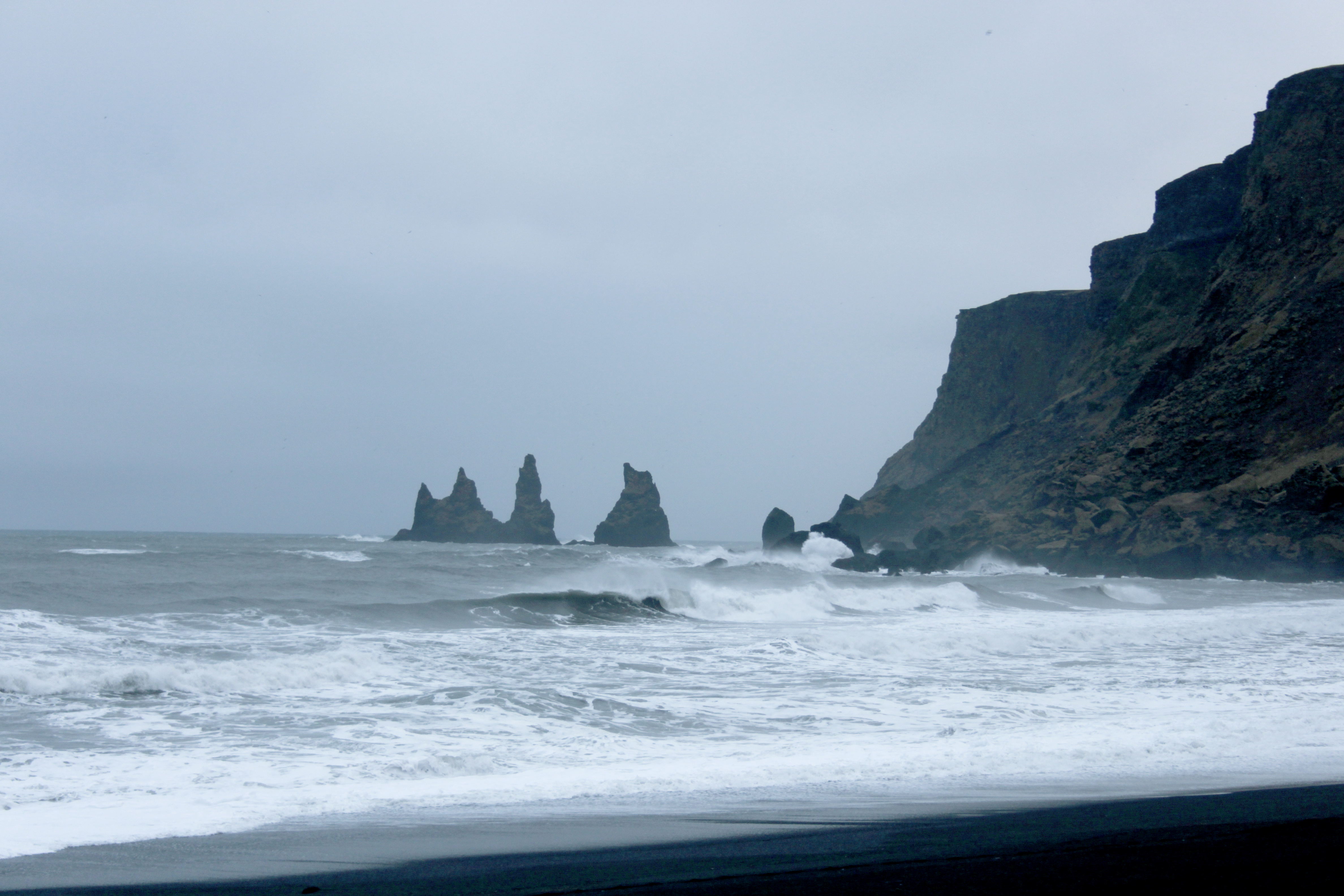 Just as we’re about to depart for the bus stop, Eiríkur turns to us and asks, “You guys have seen the black sand beach right?” We look at each other, then back at him, shaking our heads.

As Eiríkur’s dog playfully blackens himself in the basalt sand, we admire several gothic looking stacks of rock named the Reynisdrangar, rising empirically from the ocean off shore, proudly resistant to the waves which have destroyed their connection to the mainland. Wind, surf, floodwater and daily air raids of puffin crap have bestowed upon them a weather-beaten charm.

Given there is no landmass between this point—the southern most in Iceland—and Antarctica, the coast daily plays victim to a particularly ferocious set of winds called the ‘Atlantic rollers.’

Standing on the beach and hearing Eiríkur rave about his hometown’s history, gawk at its brazen beauty, and wonder at its local fauna, it’s not surprising he’s never left for the city. I almost feel sorry for his five classmates who did. I hope they know what they’ve left behind.

SPONSORED
Grapevine Walking Tours: New Dates Released
SPONSORED
Into The Glaciers: See Them While You Can