Grímsey: Hanging Out On The Arctic Circle

“You’re spending five days on Grímsey?”, a Reykjavík friend asked me in astonishment. “But there’s nothing to do there.”
”Precisely why I’m going there,” I replied. For I’d rather go to a place where there’s “nothing to do” than to a place that whacks me over the head with its activities or sights.

Since the Arctic Circle bisects Grímsey, the island does in fact have one sight—an Arctic Circle sign. And on the first day of my visit, an American cruise ship vomited forth several hundred tourists, all of whom wanted to get their photographs taken next to this sign. Some of them hit a golf ball past the sign so they could tell their friends back home, “Hey, I knocked a golf ball past the Arctic Circle.” Some, too, were wearing ersatz Viking helmets with horns. Fortunately, their invasion lasted only a few hours, and then the island returned to its natural state.

A Place With No Sights

Grímsey has over a million seabirds and less than a hundred people. Almost all of its houses huddle together along the island’s southern shore like survivors in the stern of a lifeboat. There are no discos, art galleries, internet cafes, fast food joints, or—perish the thought!—Blue Lagoons. But there is one algae-green lagoon that’s a favourite spot of the red-necked phalarope, a bird that constantly whirls around in circles to stir up plankton and insect larvae.

One day I hiked with my friend Lene to the northern end of the island. We walked past tiny haycocks and grazing sheep into an increasingly bright morning. It was a curious brightness, at once sharp and a little off-kilter, for in these northern latitudes the sun hangs low in the sky, and its rays always seem to have a hint of dusk about them. 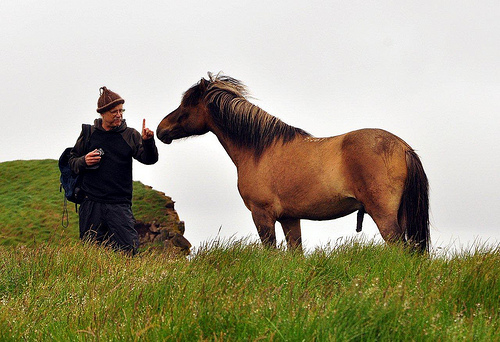 At one point, I was approached by one of Grímsey’s myriad horses, a male with a large dangling member. I moved away, and he followed. At last I stopped and informed him that I don’t go in for interspecies relationships. He seemed to understand and sauntered away.

At another point, we visited the nearby cliffs and looked at the puffins. The beaks of these birds had so many sand eels dripping out of them that they all appeared to have Nietzsche moustaches. But Nietzsche was a dead serious philosopher, and puffins always seem to have a comic aspect about them. Indeed, you could call them the clowns of the avian kingdom. 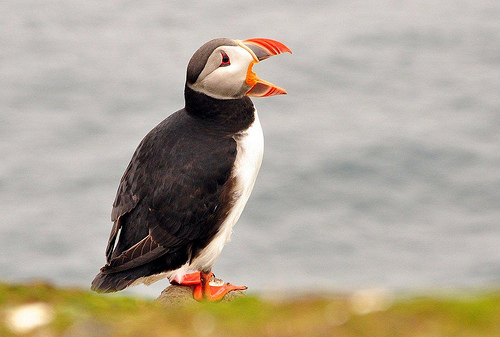 At the northern tip of the island, I thought I could make out the ice-clad mountains of East Greenland. Or maybe I was just seeing what’s called an Arctic Mirage. But what wasn’t a mirage was the sight of large SUV edgings down the footpath to this very tip.

“Icelanders think they can take their cars anywhere,” Lene remarked.

Needless to say, the car soon got stuck on the muddy trail and couldn’t make it back up the slope. In turning its wheels repeatedly, it dug itself a deeper and still deeper hole. The tally: Grímsey 1, automotive vehicles 0.

In the evenings, Lene and I would play chess on the porch of our guesthouse, Basar. This was an appropriate thing to do on an island whose old-time residents reputedly spent their days and nights playing chess. Reputedly, too, a person who lost a closely fought game would fling himself off one of the island’s cliffs in despair. Whatever despair either Lene or I may have felt at losing was easily drowned in beer or wine at the island’s sole watering hole-restaurant a few hundred metres away. 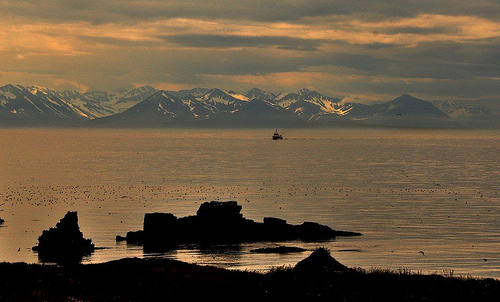 No article about Grímsey is complete unless it mentions the island’s kría, otherwise known as Arctic terns. This bird’s seemingly lighter-than-air fuselage allows it not only to take off like a helicopter and execute STOL landings, but also to dive-bomb you acrobatically, all the while screaming kría! kría! kría! As it dive-bombs you, it will peck at you with its sharp beak or release a cascade of shit onto some part of your anatomy (note: my blue anorak still has several white-ish kría-made souvenirs of Grímsey decorating it).

Such aggressiveness is not meaningless. Far from it. For the kría are protecting their nesting grounds. Problem is, almost all of Grímsey is their nesting grounds… even in front of the island’s church, where you’ll probably need to duck as well as bow it. Yet the visitor soon grows accustomed to kría attacks. And, truth to tell, it’s nice to be in a place where the primary aggressors are birds, not human beings.