A Scavenger Hunt Via GPS: Geocaching In Skagafjörður

On Friday evening we set off toward Skagafjörður where we would spend the weekend exploring. It wouldn’t be like anything we had done before; Bragi Jónsson, an Icelander who certainly knows his way around the island, would be taking us geocaching.

This modern form of a scavenger hunt via GPS is played in more than 200 countries. A German traveller introduced it to Bragi in 2009 and he has since looked for caches not only in Iceland but also in Denmark and Norway. “It takes me to places I have not been to before and will keep on doing so,” he tells me.

After spending the night at a cosy summerhouse we hit the road early the next morning equipped with a GPS. Bragi had downloaded the necessary information beforehand from the Geocaching homepage, which included a list of caches hidden in the area and accompanying hints and tips on how to find them.

The first coordinates lead us to what seems at first to be an unimpressive looking waterfall just off the main road along the fjord.

Bragi had been here before. “We went up all the way to the waterfall, but then realised that we were on the wrong side of it,” he says. “I have given up a couple of times on caches but always try to go again.” This time around he knows the way and we follow him up the hill. The further we go, the more impressive the waterfall becomes and it turns out to be a hidden treasure in itself.

Bragi keeps a close eye on the GPS. “The GPS is accurate by about five to six metres,” he says. When we reach the given coordinates it is time to search. We look in every hole and behind every stone. As it is our first time we are not really sure where and what to look for. “The more caches you find, the more you develop an eye for what could be a good hiding place,” Bragi says.

After searching the ground back and forth for about fifteen minutes we are triumphant. It is a small black film container that had been hidden in a grass-covered hole. A typical cache is a small waterproof container containing a logbook where geocachers sign their name and date. Some caches even contain a little toy or small note. Later on at home Bragi will mark the cache as “found” on his Geocaching profile.

We find seven other caches to hunt for that day. The coordinates of each lead us to interesting places along the fjord: remote farms, waterfalls and rock formations. We keep the most challenging cache for last. It turns out to be a six-kilometre walk to the hilltop of a small peninsula that is connected to the main land by only a narrow stone trail.

After an exhausting one-hour walk over rough terrain we are treated to an incredible view over the fjord and mountain range and an easy-to-find cache. Caches have different difficulty levels and favourite hideouts seem to be as far up as possible. We are exhausted when we finally get back to the car and call it a day.

The next morning we are greeted by bright sunshine, we head to Sauðárkrókur where the map promises a number of treasures. On the way we take a small detour to discover a smartly placed film container that can only be found during low tide when it is not covered by water.

Once in Sauðárkrókur we get to see the small town from very different angles. The first cache offers a beautiful view over the town and fjord while the next one takes us down to the harbour where dried fish heads are hanging from wooden rails. The smell of fish is quite overwhelming and without the lead of the cache we probably would never have gone there.

The next hints lead us to the town centre and to the cemetery. The latter turns out to be a mystery cache, providing a false set of coordinates with a puzzle. If you solve it you get the final cache location. We solve the riddle but then decide to abandon the search as it is already late afternoon and we still have to drive back to Reykjavík that evening.

Altogether we discovered six caches that day and abandoned three. One we couldn’t find despite an extensive search and another one we were on the wrong side of a river. At least the next time we will know where to find them. 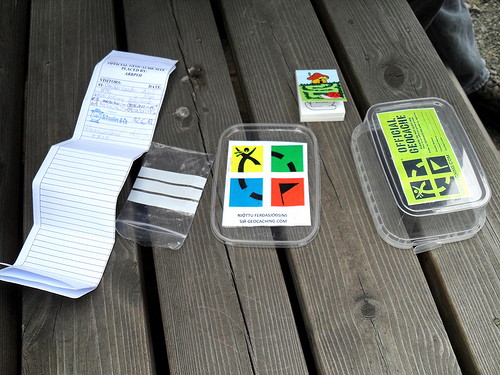 “Geocaching is a real-world, outdoor treasure hunting game using GPS-enabled devices. Participants navigate to a specific set of GPS coordinates and then attempt to find the geocache (container) hidden at that location,” according to geocaching.com.

These caches are hidden and maintained by anybody in the geocaching community. You can join the community by signing up for free at www.geocaching.com. 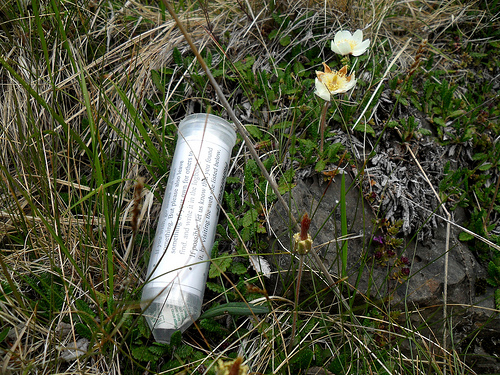 The rules are simple: “If you take something from the geocache (or “cache”), leave something of equal or greater value. Write about your find in the cache logbook. Log your experience at www.geocaching.com.” 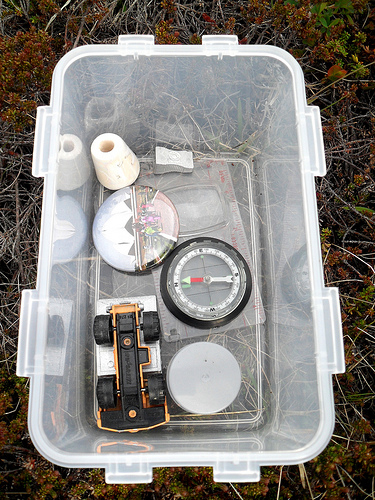