You may have noticed while looking at a map of Iceland that the Reykjanes Peninsula, where the Keflavik International Airport is situated, has a familiar shape. It looks like a boot, like a miniature version of good old Italy. You might find some similarities, like mountains, seaports and volcanic activity but the likeness mostly ends there.

The Reykjanes Peninsula is rugged and even desert-like in some areas with most of the vegetation consisting of sturdy, low profile grass, heather, moss and lichen. Birds are abundant in the summer, especially around the spectacular marine cliffs like Hafnarberg and Krýsuvíkurbjarg in the south, both easily accessible via hiking trails.

Despite a somewhat sombre look, the peninsula is, counting Reykjavík, by far the most densely populated area in Iceland. It is home to five communities west of Hafnarfjörður—Vogar, Garður, Sandgerði, Reykjanesbær and Grindavík, the latter partly centred around fishing and fish processing—and as far east of Grindavík to ﬁorlákshöfn, a thriving town at the centre of the municipality Ölfus.

From early on, Icelandic society relied on agriculture, fishing and commerce. Fishing was done on open rowboats, some of which had a low mast and two sails, three to four seasons each year. A typical boat had eight or ten sailors rowing and a captain (‘formaður’ in Icelandic) at the helm. They used a line and a hook or nets for fishing and the catch was divided between the crew, many of whom were employees of farmers or family members.

As there were no proper harbours in Iceland until late early 20th century, the fishing was carried out from makeshift beach landings where it was possible to drag the boats inland, away from the surf. These places were called ‘verstöð’ in Icelandic and there were 100–200 of them at different locations at a given time. A large fishing verstöð, or station, had room for 10–20 boats and close to 200 fishermen.

The fishermen lived in small huts made of turf, stones and driftwood until around 1900 when wooden shacks became more common. Life was hard. Small stoves, simple food, wet and cold sea conditions and long working hours demanded fit and stoic men. The notoriously fickle and often bad weather took a heavy toll on the crews. Icelandic fishermen perished by the thousands in the last few centuries of this type of fishing, before the arrival of bigger boats with proper rigs (cutters) and motors, and proper ports in the 1920’s.

One of the many fishing stations on the Reykjanes Peninsula is called Selatangar. It is situated at a somewhat sheltered inlet between low cliffs, made by two rugged lava flows that entered the sea. It was in use until the late 19th Century.

To get there, take the paved Suðurstrandarvegur road, east of Grindavík and Ísólfsskáli, which cuts through quarried scoria craters (Moshólar) of the older, 2,000-year-old western lava flow. If you want to study the interior of a scoria crater, examine the craters. The eastern flow is from an eruption in 1151 and contains Húshólmi, but the craters are farther inland than Moshólar. Look for a road sign Selatangar, on the seaward roadside. Turn and head for the coast (1.5 km) along a bumpy dirt road until you reach a small parking lot. An information board explains the fishing stations and pictures a fishermen’s hut, somewhat too large and elaborate in my opinion.

Leave the car (or bike?) and head along a somewhat obscure trail across sand and lava to the small, black hills in front, slightly to your left, for about 10 minutes. You will soon notice various ruins with walls made of stacked lava stones. Some are remains of the huts; some were used for stocking dried fish. While wandering between them, you will have to let your mind wander to the olden times and realise how difficult the fishing must have been and how lucky you are not having to endure anything of this sort. Post yourself on one of the beach rocky outcrops and follow the waves rushing ashore, before heading back to the parking lot. There, you are in for a different treat.

Immediately west of Selatangar, the Moshólar lava flow met a barrier, which slowed it down or stopped part of the flow. As a result, a lake of rather fluid lava accumulated behind the barrier. When the barrier broke, the lava pool was drained into the sea and the solidified crust subsided accordingly.

From the parking lot, turn west and you will see what looks like a lava wall. Walk 50 metres or so along the road towards the ocean, turn right and head to the most obvious breach in the wall. Follow an indistinct trail across smooth lava, which crosses a deep and narrow earthquake fissure. As soon as you reach the breach, the vista across the sunken lava lake reveals Katlar in the Katlahraun lava flow.

The irregularly shaped area is about six to nine hundred metres across and is surrounded by a 10–20 metre-high wall. Vertical rock pillars and former gas chimneys dot the area and at the opposite end, small caves meet the eye. The structure as a whole resembles the famous Dimmuborgir lava labyrinth at Lake Mývatn in NE-Iceland. Walk some of the obscure paths and marvel at the sights.

Before heading to the town of Grindavík or Lake Kleifarvatn (and onwards), drive for some 10–12 minutes farther east until you reach a signpost that reads ‘Krýsuvíkurbjarg.’ If it has been removed or damaged (yes, that sometimes happens!), confer with a road map. A dirt road allows you to drive 1–2 km towards the coastline, where you can get out and walk along some imposing bird cliffs, as far as you wish.

The cliffs, made of lava layers alternating with red or dark scoria layers, are teeming with birds from about early May until late July. You could be able to spot at least eight different species and their flocks may number 50,000–60,000.

Finally, consider hiking to the lighthouse to enjoy the squeaking, whistling and purring sounds of the bird traffic. Late in the summer, the cliff is almost devoid of birds, but the red, brown and black rocks facing the sea are still a truly rewarding sight. 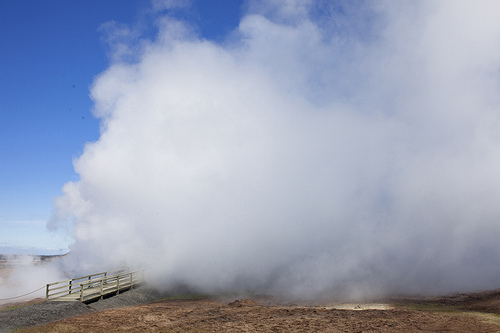 The Reykjanes Peninsula is a young section of Iceland. It is a land-born, highly volcanic counterpart of the Mid-Atlantic Ridge where two tectonic plates diverge at an average rate of 2.5 centimetres per year, witnessed by the footbridge across an open bedrock fissure, about five kilometres distance from the Reykjanes lighthouse.

An area of about 2,000 square kilometres, the area contains Ice Age volcanic tuff and pillow lava formations as fells and serrated mountains from the last glacial periods. There are also widespread basaltic lava flows and volcanic structures from ice-free periods, especially from the last 11,500 years.

Four elongated volcanic systems and fissure swarms line the peninsula from SW to NE. They contain open fissures, normal faults, high-temperature geothermal fields and numerous volcanic fissures. These are lined with various, monogenetic craters. Many small and large lava shields are found in the area. Eruptions have occurred in the three westernmost systems during the past millennium, forming a series of eruptions in the tenth and eleventh centuries, in 1151–1180 and 1210–1240.

All four volcanic systems have been active for thousands of years and are closely monitored, including the one closest to the Keflavik International Airport, called the Reykjanes Volcanic System. The last series of eruptions started as an eruption out at sea close to the Reykjanes lighthouse and then appeared inland as two sets of fissures with craters spouting lava and a rather small amount of ash and scoria.

On/off eruptions lasted for about three decades. The lava flows are measured in a few dozens of square kilometres and can be studied around the Blue lagoon and the Reykjanes Geothermal Power Plant. The second to last series occurred in the nest system to the east, called the Trölladyngja Volcanic System. During the initial lava eruption in 1151, a lava flow surrounded a medieval farm. (The ruins of which can be found at the end of a hiking trail. Look for Húshólmi close to the Suðurstrandarvegur road east of Grindavík).

One day, a new series of volcanic eruptions will commence in one of the four volcanic systems with an unforeseen impact on the communities in SW-Iceland.

Ari Trausti Guðmundsson is a trained geophysicist and mountaineer who has written a number of books from short stories and poetry to fiction. His most recent English language books are ‘Focus on Iceland,’ a road guide for tourists, ‘Magma,’ a book documenting Icelandic volcanoes from the Katla eruption in 1918 to Vatnajökull in 2011, and ‘Eyjafjallajökull on Fire’ about the 2010 eruption.

Ask An Expert: How To Avoid an Arctic Tern Attack