The fine group of peaks known as Kerlingarfjöll were named after a high rock pillar that is said to be a female troll who was turned to stone as she was hit by daylight back when her kin roamed the country. The massif is colourful and rich in contrasts with its peaks and valleys, glaciers and snowfields and all that lively geothermal activity that serves to make the area so interesting.

The mountains—roughly 1,100-1,500 metres tall—are part of a large, local centre of volcanic activity that has been around for a long time but is probably extinct by now. The main peaks cluster around the stately Loðmundur (to the west), Snækollur (the middle—and highest—peak) and Fannborg (to the east).

There is a travellers’ service centre at the foot of the mountains (more info at www.kerlingarfjoll.is). Those who wish to stay there can choose between made-up beds, sleeping bag accommodations and camping. While they do sell food on site, you’ll need to bring supplies if you plan to hike, and don’t forget to bring a swimsuit if you want to hit up the outdoor geothermal baths.

There are about twenty hiking routes awaiting you in Kerlingarfjöll. Eight of them are marked. Their length ranges from one to 50 kilometres. Descriptions may be found at the service centre website—a map is also available there (and in some of the tourist information centres in towns around Iceland).

Snækollur is an easy climb, mostly on snow, and the view is extraordinary (if you are lucky with the weather). In a nutshell, it is a short, steep snow climb in very interesting surroundings that lead you to one of the best panoramic viewpoints in Iceland. Its name means “rounded head of snow.”

You can either drive to the end of the track, past the service centre, up to Keis/Jökulgarður (ask for information at the service centre) or (better!) hike along the road past the impressive Árskarðsgljúfur canyon. When you reach the road’s end, at about 1,050 metres above sea level, head for the pass between the chest-shaped Fannborg and the Snækollur group, or—if it is late summer—head for the small pass between Snækollur (1,488 metres) and the low peak next to it (Vesturnípa).

The climb is steep and largely on snow and hard snow (firn) with dwindling glacier ice underneath it. In spring, and especially during summer, crevasses can pose some danger—you’ll have to judge whether to rope up or not. From mid to late summer, the very top of Snækollur is snow-free. Still, trails are commonly at hand, both in the snow and at the peak, because it gets a lot of traffic. The ascent time is about 1.5 hours and the elevation gain is 640 metres. Some very anxious mountaineers have scaled the top in 20–25 minutes and skied down, but you should refrain from attempting that.

Another short hike, one without a summit to finish off, allows one to witness first-hand the powerful interaction between ice and colourful geothermal activity.

Two valleys cut into the mountains, teeming with small and large geothermal openings. Both tempt hikers and photographers alike. From the end of the track (Keis/ Jökulgarður) you have a splendid view over the lower Hveradalur valley, with its fuming steam vents, boiling mud pots and hot brooks close to snow and glacier ice slopes and banks. You either start your hike up there, or drive back to a parking lot at about 900 metres above sea level and head on from there.

There are two popular variations to this hike. The shorter one (1.5 kilometres—one hour) is called Hveradalaklif-Snorrahver. You follow a marked trail and pass so many interesting sights (many of them close-up) that you will probably stay for much longer. Take care close to the hot spots! The longer hike (eight kilometres—three to four hours) elevates you by 150 metres, and is very rewarding. It is called Efri Hveradalahringur, and is an unmarked trail (ask for directions and map at the service centre if needed).

After any hike, a dip into the heavenly hot outdoor pool is a perfect end, or you may check the other facilities at the “baðhús.” And if, after all this, you still have time and interest, familiarise yourself with some of the other hikes in the area. 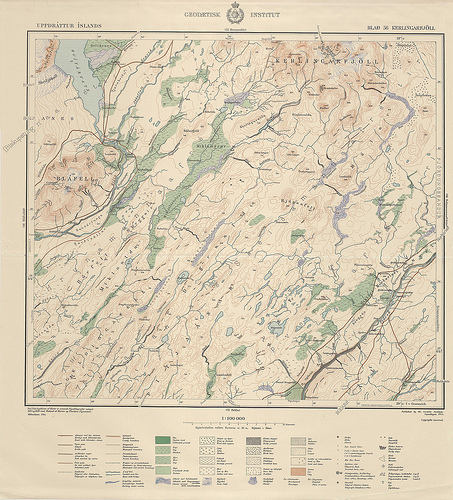 Reaching the centre of Iceland

Kerlingarfjöll are the first of the highland mountains to be connected to the lowlands via a road, back in 1939. Only open in the summer, the Kjalvegur highland route (F35) is a coarse gravel road with one small, shallow stream to ford as it branches to Kerlingarfjöll. Most cars, except for the tiny ones, maybe, can make the journey. Otherwise, scheduled buses stop at Kerlingarfjöll during summer.

The first part of Kjalvegur is bleak and stony, but the vistas are beautiful in decent weather: the large Langjökull ice cap, the multi-summited Jarlhettur row of peaks and Bláfell (“the Blue mountain”), home of giants and ptarmigans, both of which are pretty elusive.

You might stop at the big cairn, or rather heap of stones, called ‘Beinakerling’ (“Bone Hag”) and throw a stone in for good luck. In centuries past, some people used such structures to place naughty poems, wrapped around a bone, under a stone. You won’t find many of those nowadays, unfortunately. The panorama view from Beinakerling is stunning: from Lake Hvítárvatn, which once had many floating icebergs, to the majestic, glaciated Mt. Hrútfell (1,396 metres) and Kerlingarfjöll, still quite far away. A short visit to the old hut at Hvítárnes by the lake is a worthwhile endeavour.

Looking north of the Kerlingarfjöll mountains, a huge white dome called Hofsjökull dominates the view. Hofsjökull is the third largest ice cap in Iceland. At about 890 square kilometres in area, and up to 700 metres thick, it contains 230 cubic kilometres of ice weighing over 200 billion tonnes, making it one big ice cube!

It conceals a central volcano set with a deep caldera. Three lava flows are known at the ice cap margins, but little is known about its past activity. Nothing can be seen of the volcano except for small, sharp peaks (nunataks) that stick through the ice, Hásteinar and Tanni.

The ice cap and the nunataks are rarely visited and would present themselves as difficult and complex goals for experienced mountaineers. Hikers will have to make do with the immediate surroundings of the ice cap, but getting there involves route finding and fording many rivers.

Distance from Reykjavík: 177km. Check www.vegagerdin.is or www.safetravel.is where a map indicates which highland roads are open—or closed.