The Disco Mothership Lands At Harpa

Moses Hightower started warming up the crowd with some of their polite funk and low-key whispered soul. It went down smoothly, and even got kind of gritty in the last song, with some intense solos. Next up were newcomers Sísí Ey, who have been dominating 101 dance floors for a while with their pumping break-up house song, “Ain’t Got Nobody.” Their tracks are catchy and somewhat reminiscent of GusGus as they were a few years back. I look forward to hearing a full-length album from them.
Then Nile Rodgers came on stage, looking like a male Whoopi Goldberg, with his mostly black band dressed in all white. This little man oozes groove and probably sweats funk, and his Chic Foundation lived up to its name, both in style and musicianship. Starting with “Everybody Dance” and upping the ante from there, the foundation hovered over the stage like a well-oiled funky disco mothership. It included a couple of keyboardists, a trumpet and saxophone player (who were apparently brothers), a dynamic rhythm section and a couple of female singers.
Early in the concert “I Need Your Love” was a highpoint, with a wild trumpet solo and some intense grooving by Nile and the bass player. Though clearly the band leader, Nile Rodgers never let his guitar playing overshadow the rest of the band, but the few times he let loose on his instrument were some of the evening’s most exciting moments. His playing is airtight and weightless, mechanic with a human touch, melody and rhythm merged together. He even turned the tuning of his guitar into a mini-jam of sorts. 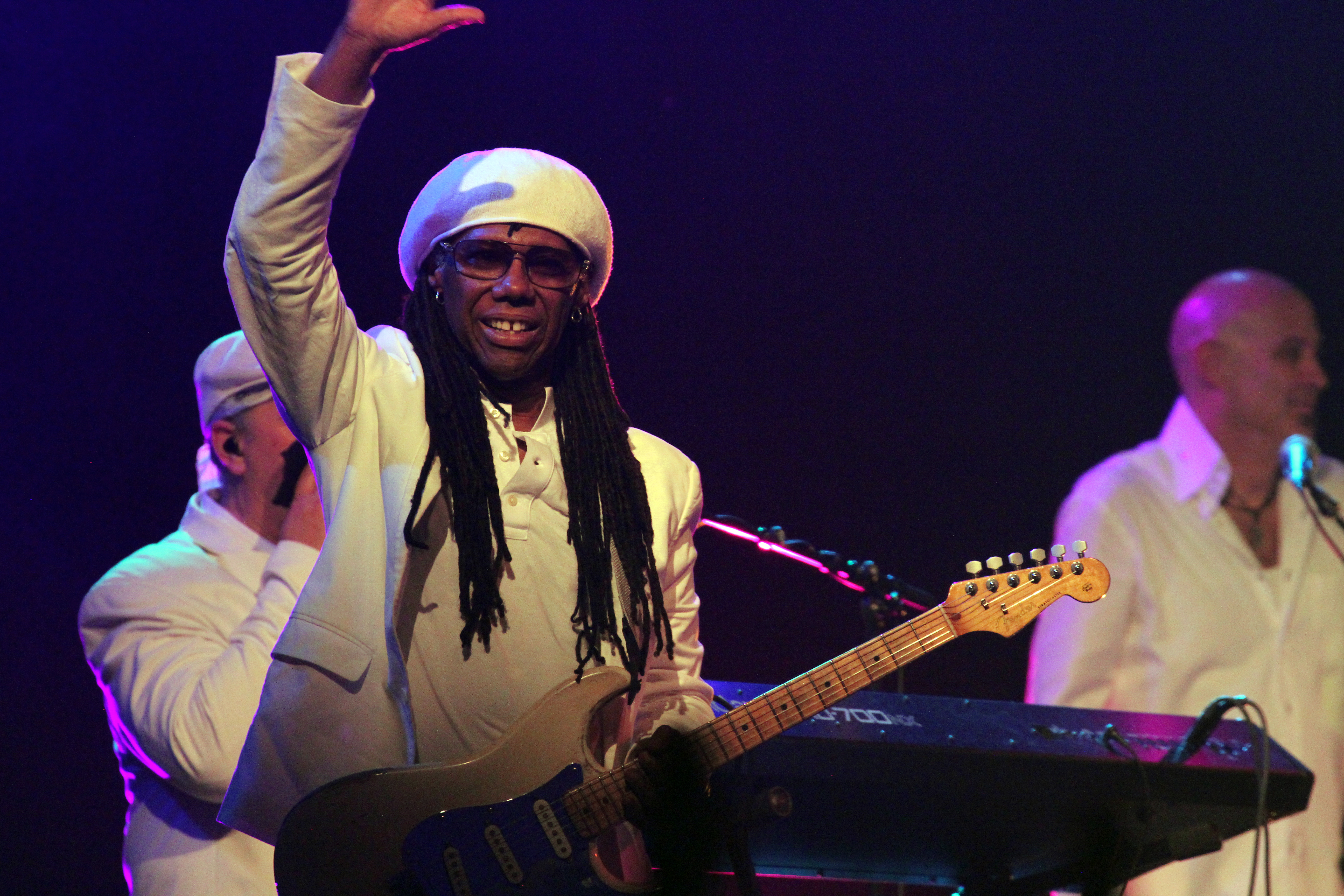 Nile Rodgers has penned and produced a warehouse full of songs for other singers and musicians, and his band ploughed through a medley of some of those greatest hits. It included “I’m Coming Out” with Diana Ross, “We Are Family” and “Greatest Dancer” by Sister Sledge, Madonna’s “Like a Virgin” and Duran Duran’s “Notorious”—and more! The crowd went increasingly apeshit with each song, and you could see middle aged woman losing their shit all around you.
The last song was an extended version of “Good Times,” complete with the Sugarhill Gang rapping on top and all the warm-up bands and their kids creating a dance party on the stage, including an eight-year-old girl air-bass-ing hard along to the bass player’s frantic slapping.
This would’ve been a great way to end the concert, but unfortunately that was not the case. Instead the recording of “Get Lucky” was played through the sound system at a volume not high enough to really freak out to, and the band members did a half-assed dance to it and then wandered of the stage one by one. So instead of going out with a bang it just sort of faded out. There were also occasionally elements of cheese lingering along the set, like too many “Woop Woops” for my taste, and some rather awkward hip hop call and response antics with the crowd. And the drummer who for some reason sang “Let’s Dance” was certainly no David Bowie, so let’s just leave it at that.
But overall it was a groove and dance-athon and one hell of a sweaty ride from the main architect and engineer of late ‘70s New York disco.