Why I Wrote ‘Tales Of Iceland’

When I picked up my first copy of the Reykjavik Grapevine while on a tour of Iceland, I had this staggering, overwhelming thought that went something like: “Quit your job, move to Iceland, never look back, and write for this wonderful rag full-time.” So taken was I with the country of Iceland in all its beauty, friendliness, charm, and ceaseless winking wit, that throughout my trip I had this unformed urge to just move there and see what happened.
Alas, I had bills and friends and a career back in the States, so instead I wrote a travelogue called ‘Tales of Iceland or Running with the Huldufólk in the Permanent Daylight,’ which juxtaposed a detailed account of my adventures (and misadventures) with my friends Trin and Bojo with all the great stories we heard during our travels. This included but is not limited to: meeting a raging drunk Kiefer Sutherland, interviewing Jón Gnarr, hiking glaciers, drinking, women, drinking, socio-political and economic commentary on the island nation, hidden people tours, and drinking. Not knowing what I’d write or how I’d even begin, I ended up with a document that simply proved to myself what a potentially life-shaping experience it can be to travel to a place you never before could conceive of in your imagination.
Since then, Trin and I have teamed up to turn the ‘Tales of…’ brand into a series. Right now, we’re in Quito, Ecuador, gathering interviews and experience in one of South America’s most interesting and often overlooked countries. Our ambitions for these books are simple: we want them to be entertaining as hell, riotously funny, occasionally offensive, dark, hopeful, dreamlike, challenging, and a quick way to inspire people to get out and travel. Even if it doesn’t inspire them to travel, maybe it will inspire them to see the world in a different way.
As I write early on in ‘Tales of Iceland,’ these books are not intended as travel guides. Travel guides and travel gurus are virtually everywhere, overflowing bookstore shelves (or Amazon servers, I guess). What we’re trying to get at is the peculiar, hilarious, unyieldingly strange and wonderful underbelly of modern travel, warts and all.
Of course this means acknowledging that we may be full of shit and as soon as a big corporate publisher comes along and offers us 3,000 USD and a lifetime supply of skyr in exchange for the trademark we will sell out faster than an Icelandic banker (boom!). But for now these are books coming straight out of my brain, gleefully profane and meant for raw consumption. Hopefully, we will soon add other writers to the mix. Hopefully, we will soon sell many more books. Hopefully, we will soon be placed on the watch list of autocratic regimes from Russia to Venezuela because we really love free expression—it helps you talk about politics, history, justice, environmental rights, and penis jokes.
The Grapevine was kind enough to include an excerpt from Tales of Iceland, which will give you an idea of just what exactly this book about Iceland is all about. 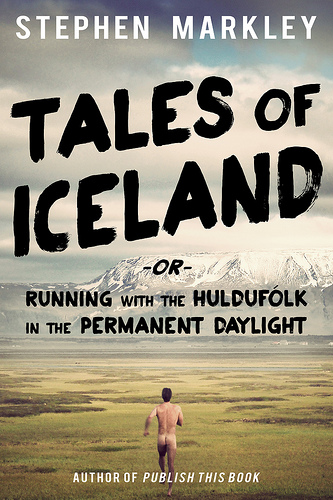