I met my tour guides at the ITM Tourist Information Office on Bankastræti. (Note: You read it correctly: it’s ITM, not ATM. I made a fool of myself asking around for a cash machine when I knew perfectly well there wasn’t a single one nearby, then panicked because I was running late and randomly began asking anyone dressed in a red or orange anorak—i.e. obvious tourists—if they were by any chance part of a food tour. By then it was five minutes past the appointed hour, and the only reason I found the tour at all was because I stumbled into the Tourist Information Office to ask around).
Laufabrauð And Malt Extract
Our tour guides were called Dana and Barbara. Dana, a young woman from the Czech Republic, definitely looked the part of a mountain guide, with her tanned face and a traditional wool sweater. Barbara was an elderly woman who’d come to Iceland from Germany in the 1950s and still seemed fascinated by the former, judging by way she talked about the artistic patterns of the laufabrauð (a kind of deep-fried wafer eaten at Christmas) that we sampled at the beginning of the tour.
Outside, it was bleak and rainy—almost dark for a summer’s day. When I remarked upon how bad the weather had been this summer, Dana and Barbara looked at me incredulously. “We’ve had far too much sunshine the past three summers!” Barbara exclaimed. In Iceland? Really?
We crossed Lækjargata over into what our guides called “Old Reykjavík,” which once was separated from the rest of the area by a creek that the street Lækjargata is built over. “This used to be a bakery, here was a windmill,” Barbara pointed out to us. Our first stop was at Hressingarskálinn, which formerly housed the oldest restaurant in Reykjavík as well as Iceland’s first McDonald’s. It’s also where girls used to go to meet British and American soldiers during World War II, as many an old lady I’ve met on the bus has sighed about. Here we had a sip of malt extract, which is something of a national beverage. Usually it’s mixed with orange soda and consumed at Christmas, but it’s sweet enough on its own. It’s also good for digestion, Barbara noted, and an alternative to beer if you’re pregnant. 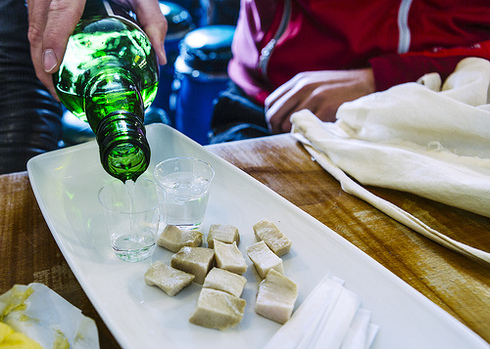 Fermented Shark And Brennivín
Past Hafnarstræti (once known as the “Baron’s street,” according to Dana, and then just “Rónar” street, referring to the drunkards who frequented it) we finally came to the Old Harbour, which has been completely revamped in the past couple years and is now teeming with charming restaurants and cafés. Sægreifinn (The Sea Baron), however, has been going strong for longer than I can remember, and it was here that we stopped for a bite of fermented shark, to be washed down with a potent shot of Brennivín (schnapps made from potatoes and flavoured with caraway and angelica).
This struck me as a kind of rite of passage, because choking down a mixture of ethanol and ammonia requires all the pig-headed stubbornness you can muster. But you do feel brave afterwards. And shark is good for digestion, Barbara added, after chiding us good-naturedly for trying to cut the shark into even smaller pieces. 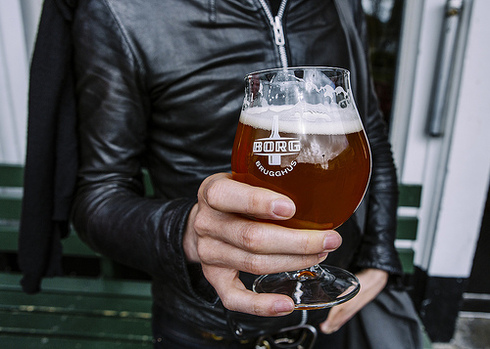 Soup And Beer
Our next stop was MAR restaurant, where we had a delicious bowl of seafood soup with bread and whipped butter. Although the soup was perhaps more reminiscent of a Thai curry than a common Icelandic dish, it went down a lot more smoothly than the shark. Barbara explained to us much how much had changed in the decades since she’d moved to Iceland. “People ate two large meals a day—that is, meat and potatoes. Salad was for cows, completely unfit for human consumption,” she said. It goes to show how much things have changed, food-wise. As the meal progressed, our conversation turned to forestation issues in Iceland (is the lupine a boon or pestilence?) and other riveting current affairs.
When our bellies were full, we headed off to the English Pub—but only to sample Icelandic beers, thank you very much. On the way we stopped at Vínbúðin, the government-operated liquor store, where Dana pointed out a few popular varieties of Icelandic beers and liquors, as well as dishing out some free advice. “Buy it in the Duty-Free—it’s way cheaper!” she whispered. At the English Pub, a friendly waitress poured us each a glass of Polar Beer, explaining that it was the first beer produced by Ölgerðin, a local brewery, after the ban on beer was lifted in 1989, and immediately sold out. We also sampled Ölgerðin’s award-winning lager, Gull, and the Úlfur (“Wolf”) IPA, which had a nice—perhaps even wolfish—bite to it. The samples had been generous, as I was feeling lightheaded and a little silly by the time we left.
Cheese, Meat And Ice Cream
As we made our way up Skólavörðustígur at a leisurely pace, we stopped at a cheese shop to sample some Icelandic cheeses and had a taste of some incredible cured meats, including goose and mutton and horse. Our last stop was Café Loki at the top of the street, a cosy corner restaurant overlooking the impressive façade of Hallgrímskirkja church. Loki is the name of Norse trickster god, but the only surprises that awaited us here were pleasant (and edible) ones. The restaurant specialises in traditional homemade Icelandic dishes such as meat soup and fish stew, but we came for dessert: Ice-cream with rye bread crumble, whipped cream and rhubarb-caramel syrup, accompanied by a cup of Loki’s specially brewed birch tea. By now, the weather was brightening and the skies were clearing up and drying out—the perfect conclusion to our palate-pleasing tour. Or, as Icelanders say, “the raisin at the end of the sausage.” 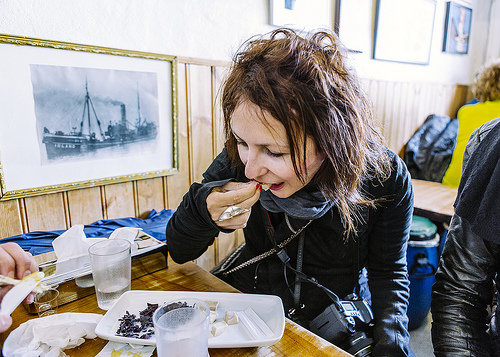 These Human Shaped Pylons Were Never Built, But They Might Be

Just Sayings: On With the Butter

That Time The Grapevine Ate Everything At Borg29

Don’t Despair, Skuggabaldur Is On The Prowl