I Dream Of Cheeses

Two years ago, I made a Seinfeldian pact with a friend to go the entire month of February without consuming any beer or cheese—both of us having a strong penchant for artisanal products in particular. Needless to say we caved quicker than Kramer, with whole wheels of Brie and six-packs of microbrews. So naturally when I heard that Búrið, one of the finest specialty shops in Reykjavík, was holding its own workshop on Icelandic cheese and skyr, I was there like bloomy rind on Camembert.
Oh, sweet cheesus
I arrived to the shop’s recently opened cheese school and was warmly welcomed by owner and tutor Eirný Sigurðardóttir (although, admittedly being a regular customer here, I like to think of her as my dealer). My attention was quickly directed to a long thin table piled with pure epicurean bliss. Cutting boards laden with bricks, wedges, wheels and chunks of every sort of local cheese, fresh cut vegetables, dried fruits, nuts, jams, chutneys, oils, bakery bread, gluten-free crackers and an array of salted cured meats. At the end, another table stood alone displaying a selection of skyr. My eyes were watering with joy. 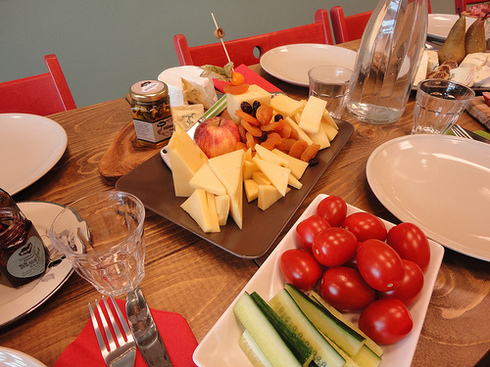 Our small workshop group was soon rounded out by an Icelandic entrepreneur and a Canadian couple, one of whom was (surprise!) a cheese dealer. Eirný invited us to take our places, squeezed between the feast, and boisterously commenced the course. She guided us through a condensed history of Icelandic dairy, from the time of settlement to present day, in a sort of non-linear wibbly-wobbly way. We soon learned that Icelandic cows today come from the same lineage as those from medieval times, and that production of skyr goes back to then as well. And on that note, it was time to start tasting.
Medieval to modern
We began our sample with three skyrs: Erpsstaðir’s sveitaskyr (“country skyr”), KEA’s plain skyr and Biobú’s organic skyr. The first was the oldest style, with a dry, crumbly consistency and sharp acidic flavour which the Icelandic entrepreneur vocally rebuffed. KEA’s was skyr as it’s meant to be eaten: thinned out with milk, giving it a smoother, lighter texture and taste. The organic variety was pretty much exactly like a nice yogurt. It was pretty much general consensus that the store-brand variety was the most appetising of the lot, because damn, that stuff is so good. 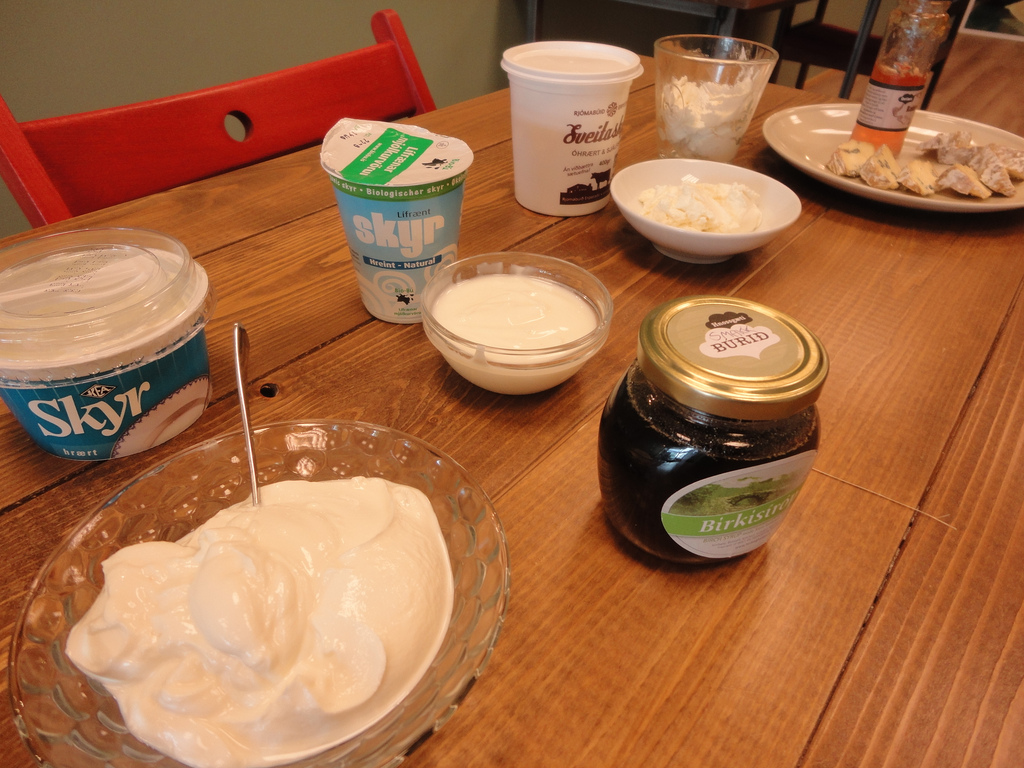 Then came the moment of truth, as Eirný skipped ahead to 20th Century Iceland and the advent of cheese production—a limited and unglamorous affair until quite recently—and we picked up the cheese knives. We started on the cooked-curd cheeses, Ísbúi and Tindur, both made by Óðals, which are modern takes on the oldest types of cheese available in Iceland and regular visitors in my kitchen. The former has a rich, creamy and sweet flavour and the other is tangier, more explosive and sharp. Both are very tasty.
Next we moved onto Búri, a semi-soft, cratered cheese modelled on the original cream Havarti created in mid-19th Century Denmark. Although it’s more of a younger, cooler cousin to Havarti, it shares the same mouth-melty quality and is a truly satisfying cheese to chomp on. Eirný suggested taking this cheese to a barbecue, throwing pineapple on the grill and pairing them for a fresh, savoury summer feast.
Rind time
On the same board was an Icelandic Camembert, “which is not really Camembert at all,” Eirný said, shrugging. It is one of the first types of bloomy rind cheese to be introduced to Iceland, first produced here in the ‘80s and only recently gaining popularity, as local palettes have become more distinguished and choosy. But penicillum candidum does not a Camembert make, and the local variety barely tastes like a light Brie. Meh! 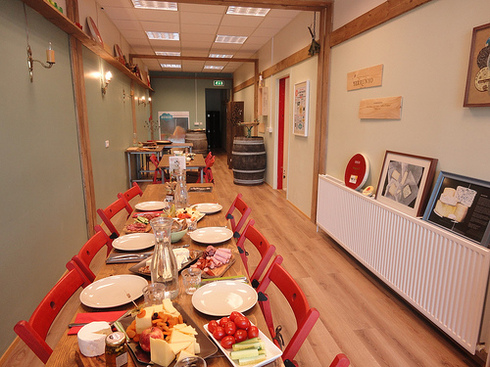 Then it was onto the blues! Our final selection consisted of Gráðaostur, a solid wedge of rindless blue; Stóri Dímon, a large dense circle of cheese with slightly colourful rind; and Ljótur, an 8-week aged cheese with a mottled brown-and-white rind and thick racer stripes of grey and green mold. While the Camembert was so underaged it practically had no flavour, cheese producers somehow made the leap over to making really excellent and tasty blues. I couldn’t put down the cheese knife, especially on that Stóri Dímon, oh my fucking god, and thoroughly assumed the role of workshop glutton.
Finally, Eirný managed to wriggle the board of blues out from under my face with a magnificent parfait—KEA’s vanilla skyr, with brown sugar, blueberry jam, and graham crumbles in a fancy martini glass. This, we learned, is the most classic Icelandic dessert that has withstood centuries of eruptions, famines, dairy shortage, colonisation and modern importations. Icelandic cheese and skyr really is a wonderful, wonderful world.
—
The Wonderful World of Icelandic Skyr and Cheese workshop takes place at the Búrið Cheese School on Nóatún, every Monday and Friday at 12:00 until August 26. It costs 5,500 ISK per person and registration is recommended at burid.is.

Icelandic Meteorological Office Issues Yellow Warning For Much Of East

A Crazy Microcosm On A Fjord: LungA Is Back And Better Than Ever

Lost In Google Translation: The Sea Bids Farewell—To Itself

Islands Of Wonder: Winning The Weather Lottery In Vestmannaeyjar

by Valur Grettisson and Shruthi Basappa 10:50 am