Soup of the Day

It’s that time of the year. Albeit slowly, the days are shrinking and the mercury is dropping. Autumn is upon us, people, and there’s nothing we can do about it. But with the colder, darker days come a wealth of benefits, among them an increased enjoyment of warm and hearty meals to keep your insides toasty even if your outsides aren’t. I’m talking about soup. Sure, it’s a menu staple all year round, but never is it more appreciated than in the colder months of the year, when you shuffle into your favourite eatery, strip off your multiple layers and lift a steaming spoon of the good stuff up toward your chattering teeth. Okay, so it’s not that cold yet, but to prepare you for the dark days into which only a hot liquid meal can bring a modicum of light, we’ve sampled some of the many soup-of-the-day offerings in town so that as autumn continues and winter arrives you can go where the heat is rather than being left out in the cold. 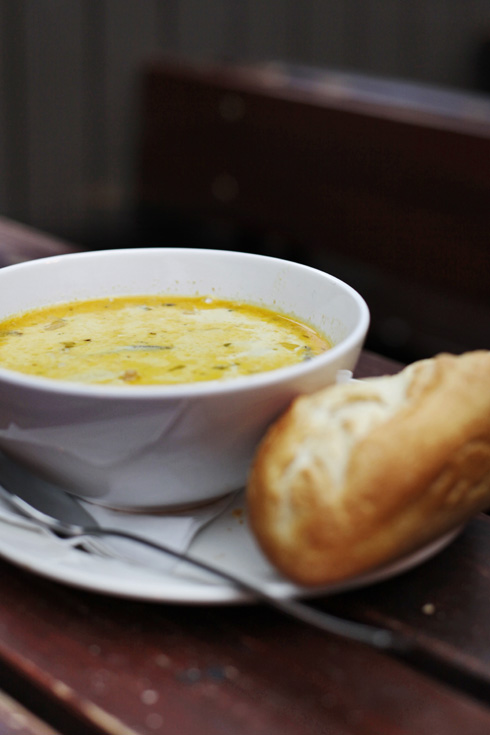 The week was getting off to a good start when I waltzed into Hressó and spied the soup of the day scrawled on the blackboard near the entrance— chicken and vegetable (890 kr.): a classic mélange. A few minutes after ordering a steaming bowl of creamy soup was placed in front of me. First impression was, quite honestly, ‘damn, it’s cream of chicken!’ but, as is often the case, I lept to conclusions too soon. It was creamy, yes, but this wasn’t a thick and heavy f lour-laden cream soup. It was somehow lighter, like a simple broth with just a dash of cream added for richness. It’s pretty nice. And it was loaded with veggies—mushrooms, onion, bell peppers, etc.—and large cubed portions of chicken. Some of the pieces of chicken were rather dry, while others were appropriately tender—were two batches of soup mixed together? I may never know. Hressó serves their soup with a side of baguette slices and good ole Icelandic butter; perfect for sopping up the last dregs that your spoon can’t manage. 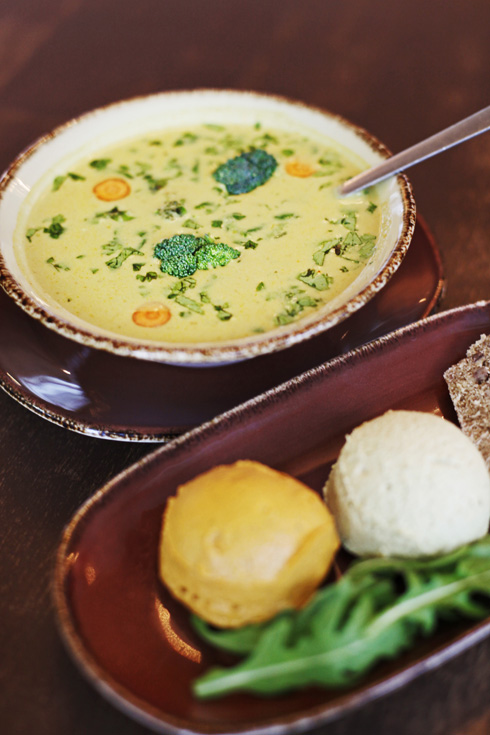 When the gamble of trudging out of the house, running the risk of the soup of the day being a dud isn’t appealing to you it’s a much safer bet to visit Kryddlegin Hjörtu, where they offer not one, nor two, but FOUR soups of the day (1590 ISK at lunch with bread and salad bar)! It’s a soup of the day buffet! On the day I visited the pickings were coconut curry, seafood soup, mushroom soup and salsa chicken soup. Between my date and I we tried them all and sampled the salad bar. My soups were kinda a bust. I found the seafood soup to be f lavourless and my mushroom soup followed suit. Their redeeming qualities were the ample amounts of seafood and mushrooms, respectively, therein. My date, however, struck gold with the salsa chicken soup, which she cheekily topped with tortilla chips, and coconut curry soup, which was so hearty it likely provided her with the recommended eight servings of vegetables for the day. I’m typically a sucker to anything coconut based and I was kicking myself for questioning my gut. We were both pleased with the salad bar, though. Ample crisp spinach and romaine, a nice selection of cold barley, rice, and bean salads and super yummy spelt bread all complimented the soups nicely. 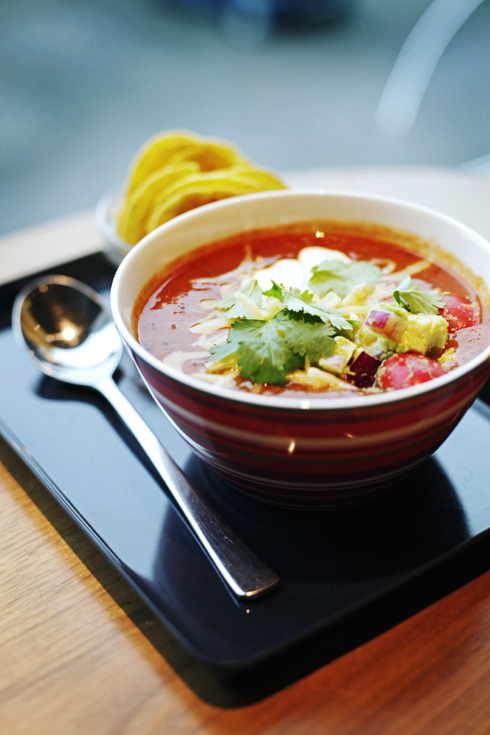 When the name of a restaurant has the word “soup” in it, you go for the soup. That’s what I did, at least. My date was otherwise seduced. So when I ordered my soup and half a sandwich (combo deal for 1400 kr.) and was presented tandoori, lentil and coconut soup topped with sour cream and toasted almonds and sided by a toasted mango chutney and mozzarella sandwich I was over the moon. Honestly, I had been worried about the soup maybe tasting too much like a sauce at an Indian restaurant, but it was subtly spiced and the sweetness of the coconut peeked through the tandoori beautifully. It was also loaded with lentils and vegetables and, luckily for my date, was super filling so she got to eat my sandwich (also a gorgeous combination of sweet and spicy chutney with crisp red onion and chewy mozzarella) when her “daily special” (also 1400 kr.) was a total bust. The place is named for soup— ordering chilli that was thicker than grandma’s favourite oatmeal and oddly laced with super sweet pineapple is a rooky mistake. The chilli didn’t even come topped with cheese. Lame.
Súpabarinn (Hafnarhús)
What we think: Go for the soup
Flavour: The soup is soup-erb(get it?), the chilli not so much
Ambiance: Casual lunch joint in an art gallery. Good llight.
Service: Efficient.
Rating: 3.5/5 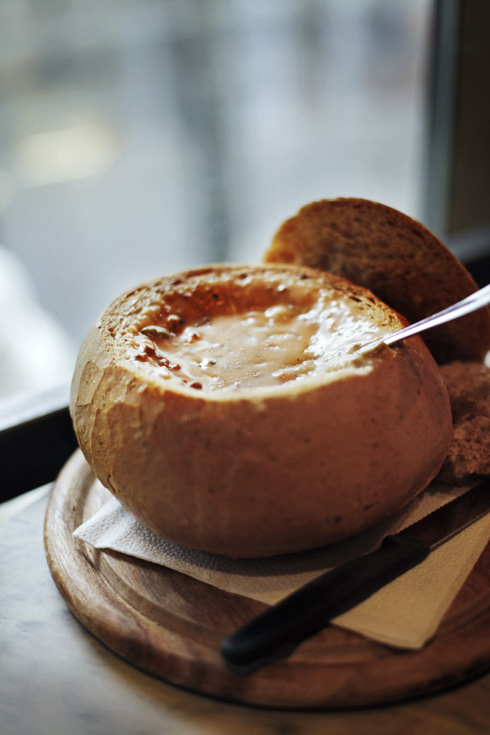 Rather than serving soup with side of bread, Svarta Kaffi does away with the bowl and dishes their soups (two f lavours are available daily) directly into a hollowed out loaf of whole-wheat (1390 ISK). On the day my date and I made our way up Laugavegur the soups on offer were creamy mushroom and an Italian meat soup with lamb, pork and beef (woah!) and loads of veggies. My date was enamoured with her mushroom concoction, gushing over how ample the slices of mushroom were and how tasty the cream soup was. My thick meat soup was equally tasty, though I was not bowled over by the viscosity, which was a little on the gelatinous side. Still, it was full of vegetables and all that meat wasn’t overwhelming at all. The Italian spices gave the dish a nice kick, too. While we were far too stuffed to eat another bite, it was nice to learn that the soup is refillable… if you haven’t already eaten your bowl
Svarta Kaffi (Laugavegur 54) .
What we think: Really nice soup and great bread,too.
Flavour: Balanced.
Ambiance: Cosy, with big windows for people watching.
Service: SO friendly and attentive!
Rating: 4/5 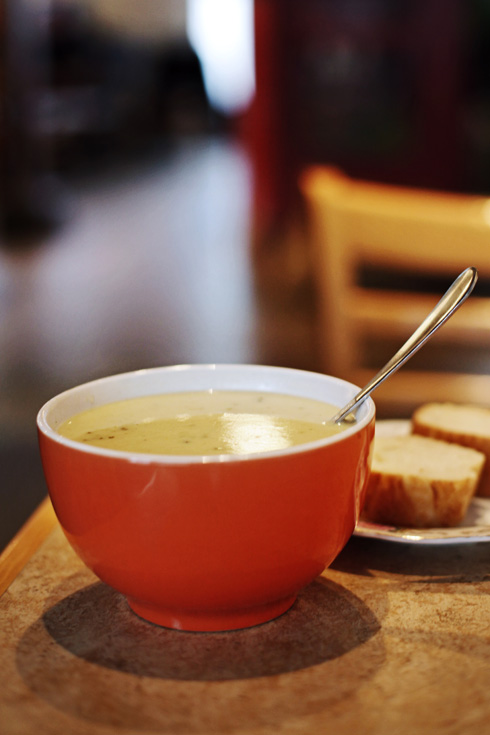 Distinguishing itself from the other soup-of-the-day joints that are shilling restaurant quality soup, the recently relocated Café D’Haiti is offering up something that tastes more like home. The soup on Friday was Belize vegetable (750 ISK) and was it ever good. Rather than coming across as a run of the mill cream of vegetable soup, this offering was a hearty puree of real veggies dotted with larger chunks of peppers of all colours. The real clincher, however, was the spice. Is it nutmeg? The chef says ‘no’. A hint of mustard seed? No. All I could get out of the tight-lipped Francophone is that it’s a secret blend of spices. It’s no secret that it’s delicious and whatever the blend is, it tastes like autumn and warms all the senses simultaneously. The soup can be combined with a salad for 1250 ISK, but my date and I opted for a slice of quiche (500 ISK) each instead. Here we were slightly torn, as I found my slice to be slightly loose and bland. She ate hers up. Loose quiche or not, it was a satisfying meal.
Café D’Haiti (Geirsgata 7b)
What we think: Homey and hearty soup
Flavour: Impeccably spiced and natural tasting.
Ambiance: Bright and airy space.
Service: Friendly and hospitable
Rating: 4/5

That Time The Grapevine Ate Everything At Borg29