No Place For H&M

An hour before ATMO’s grand opening on November 15, CEO Ásta Kristjánsdóttir was far from ready in a flowing white top, grey jeans and pink and grey Nike sneakers. She hadn’t finished putting on her make-up, but there were a dozen small tasks to be completed first: construction workers needed directions on last minute projects, ceremonial ribbon cutting scissors needed to be spray painted red, random mops and brooms needed to be moved out of the hallways. It was the sort of chaos that probably goes on backstage before a runway show.
“I’m running around fast, so you’ll have to run fast if you’re coming with me,” Ásta tells me. And we do run—up to the all-white offices on the top floor; down to the second floor, where racks and racks of knitwear share space with shoes, purses and accessories; and down to the lobby, where children’s clothing by As We Grow and Ígló, among other things, are on display. The basement, the only area that’s ready for guests, features Red Cross clothing handpicked by ATMO designers.
Ásta’s involvement in Iceland’s fashion industry spans more than a decade with her founding the modelling agency, Eskimo, in 1997. From there she moved into designing, founding E-Label, a women’s clothing brand sold at Topshop, in 2007, and then finally founding the Reykjavik Fashion Festival in 2009.
A year later, in 2010, she began working on securing financing for the building of ATMO, which opened for the first time in March 2012 as a brief pop-up market during DesignMarch. The success of the initial launch prompted her to open the store full-time and the multilevel design and fashion house, which doesn’t charge rent but does take a cut of sales, now holds lines by sixty of Iceland’s established and up-and-coming designers.
Does Iceland need a  design house?
One feature that sets Laugavegur apart from other major shopping streets is the absence of a large, international, mass-market clothing shop. Kringlan has a Zara and a Topshop, but Laugavegur (and the entire country) are completely devoid of Forever 21s and H&Ms. “H&M was actually going to take this house,” Ásta says. “And I’m really happy that we’re here instead. If H&M would have opened here, so many shops would have gone out of business, especially the Icelandic designers.”
But why do Icelandic designers need a single, massive store to operate from? Many of the ATMO designers have achieved some level of success outside of the country. Brands like Cintamani ship internationally, while designers like Mundi have presented lines in fashion weeks around Europe and others, like Birna, operate shops both in Reykjavík and abroad in Copenhagen.
“All these designers, they have little shops to put their products in around town,” Ásta says. “but it’s a lot of work to stand in the shop or pay someone to do it. Many of the designers don’t have time to do the designing and take care of the manufacturing because they’re involved in the store all the time.”
There is also the camaraderie aspect, the “strength in numbers” appeal of ATMO. “We quite like the idea of all the Icelandic designers staying together,” says Þórunn Hannesdóttir, part of the design team behind FærID. “It gives us the feeling of a department store filled with Icelandic designers, something that we want to be a part of. There’s so much support in being part of a group.”
Icelandic design: wool, knitwear and optimism
The hope is also that there will be greater opportunities for the individual designer through the collective, specifically where finances are concerned. “We can say to a bank, ‘Here we are 60 people and we all want to do business with your bank. Can you help us by doing this and this,” Ásta explains.
If designers can’t finance their designs then they don’t produce any products and ATMO ends up with empty shelves. “If you want to know what we’re the most scared of, it’s that the designers won’t be able to manufacture more products,” she says, pointing to rows of near empty shelves near the entrance. In one day, of the ten Umemi’s NotKnot pillows (woollen bundles inspired by scout-style twists) on sale, eight were purchased. “And we called the designer and said ‘Well, it sold out,’ and she said ‘Sorry, I don’t have any more.’”
In the future, ATMO plans to host workshops and speaker series with the goal of helping Icelandic designers to finance and sell their designs. “In Iceland I think we’re really good at designing, but all the backend stuff, the making it and financing it and marketing it, that’s a different story.” Ásta says she also plans on turning the house into a showroom two to three times a year, to present Icelandic design to international buyers. “We’re all very positive, “Ásta says. “I mean, being from this small island in the North Atlantic and thinking that we can become Gucci or something, it’s pretty optimistic.”
—
Designer Spotlights 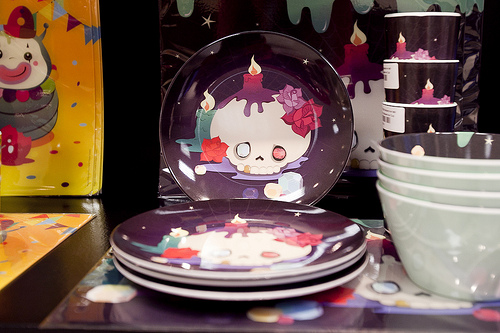 Signý Kolbeinsdóttir: Tulipop
Founded: January 2010
One part cuddly and one part goth, Signý Kolbeinsdóttir’s Tulipop characters challenge the idea that certain colours, designs and symbols are gender-specific. “There’s so much going on for guys that has a scary side to it, but for girls it’s always ‘everybody should wear pink and ribbons,’” Signý says. Characters like Bubble, a gentle-hearted mushroom boy and Skully, a rough around the edges lady-skull worthy of a “Hamlet” production, bend gender stereotypes and make great plate, bowl and cup designs. 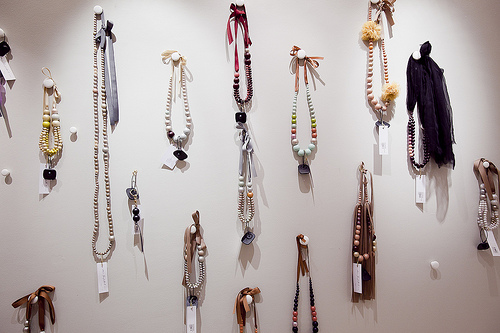 Hlín Reykdal: Hlín Reykdal
Founded: 2007
“I think of colours, because each piece is unique and hand painted by me,” Hlín Reykdal says of her line of beaded necklaces and bracelets. Hlín graduated from the Iceland Academy of the Arts in 2009, where her graduation show featured a series of bold, colourful accessories. In her current line, every bead is hand painted by the designer with colours she designed. 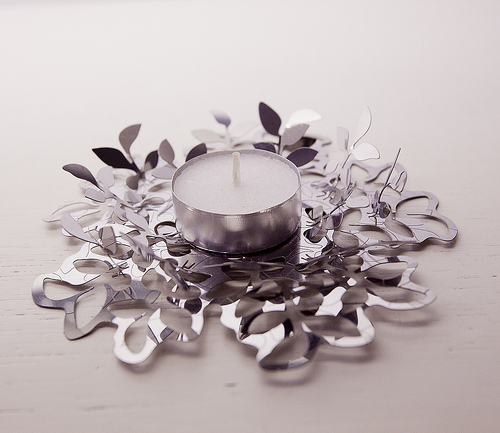 Guðrún Lilja Gunnlaugsdóttir: Studiobility/Bility
Founded: 2005
In 2005, Guðrún Lilja Gunnlaugsdóttir started off with Studiobility, a line of high-end furniture products. Bility is the result of the 2008 crash and a dose of pragmatism. “It’s kind of crazy to be making very expensive things that no one can afford to buy,” Guðrún says. One of the first Bility products to hit the market was the Bilberry candleholder, a thin, stainless steel cluster of bilberry branches.
Þórunn Hannesdóttir, Karin Eriksson and Herborg Harpa Ingvarsdóttir: 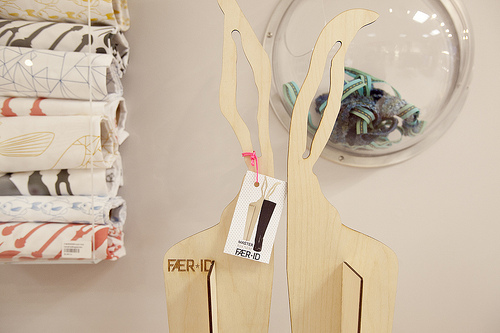 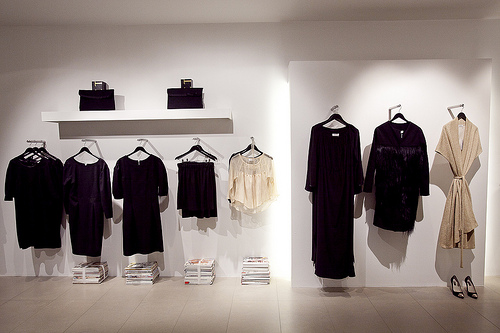 Dúsa: Skaparinn
Founded: 2007
Dúsa’s first design was a red, cotton sleeveless cocktail dress. “Sleeveless,” she says, “because I didn’t know how to make sleeves yet—I was 15.” Since that first design she’s produced seven lines, specialising in women’s clothing and bags. Dúsa says she sees her line being worn by a woman who isn’t an attention seeker, but is adventurous and mysterious, always looking for action “and cocktails, which is what fashion is all about in the end,” she says.